CHANDIGARH: City roads continue to be in a shambles with local residents complaining that they have never seen such a poor condition of roads in the City Beautiful. 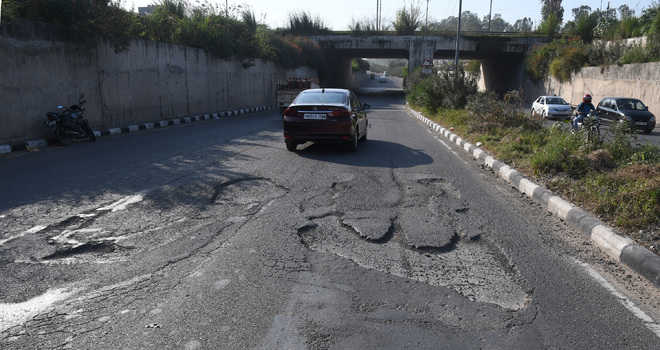 City roads continue to be in a shambles with local residents complaining that they have never seen such a poor condition of roads in the City Beautiful. However, the authorities concerned seem least bothered about it.

Potholes and tattered and broken roads are a common sight in the city and these have become a nightmare for commuters. In a random check, the railway station road, while heading from the Hallo Majra side, was found totally damaged. It gave the look of some distant small undeveloped village road.

The road stretch from Hallo Majra towards Panchukla near Vikasnagar had big potholes, giving a bumpy ride to motorists. A badly damaged road was also witnessed in the Industrial Area near the Haryana Roadways depot. Some spots on Madhya Marg were also in bad shape. A stretch near the Transport light point was in a pathetic state.

The road in front of the Piccadilly mall has been in a tattered condition for long, but it has failed to make the authorities wake up from their deep slumber. The stretch near the PGI chowk has been a particularly bad shape for months now. Similar is the plight of several other roads in the city.

The UT Administration maintains 1,800 km of road stretches in the city, while the civic body takes care of the remaining 1,800 km.

“The UT Administration has misplaced priorities. The city was known for its world-class roads. A motorist could easily make out from the condition of the roads that he had entered Chandigarh. Now, there is no difference between the roads in Chandigarh, Panchkula and Mohali. The MC is under the clutches of the Administration and looks to it for every small thing. Since the Administration is not giving the required funds, how will the civic body repair the roads?” said RK Garg, president, Second Innings Association.

“I wonder why the Administration took so long to release Rs 15 crore for road recarpeting. Things like renovation of Panchayat Bhawan and the Secretariat can wait. The UT should prioritise things which directly affect the residents. So many patients face problems due to bad condition of the road near the PGI, but no one seems to be bothered,” he said.

FOSWAC chairman BS Bittu said, “It is a failure of the authorities, who have no concern for basic amenities.”

UT Chief Engineer Mukesh Anand said, “We have already started repair work on Madhya Marg and the on the road near the PGI, which fall under our purview.”

The MC had asked for Rs 38 crore to recarpet 300-km road stretches in the city, but got only Rs 15 crore. However, the civic body, which got this amount on October 4, is yet to start recarpeting work even though the work has already been allotted to contractors.

It had earlier identified 40 roads where work worth Rs 22 crore is to be done. “Since we got less funds, I have asked the zonal in-charges to further identify the worst roads among these for repair work,” said MC Commissioner KK Yadav. Even four days after a 21-year-old youth died in an accident due to a pothole on a road in Mauli Jagran, the UT Administration and the MC seem to be least bothered about it and are passing the buck on each other.