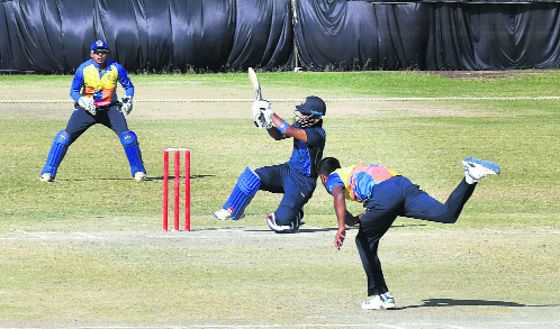 Sandeep of Hyderabad plays a shot during the Syed Mustaq Ali Trophy match at the Sector 16 Cricket Stadium. Hyderabad defeated Chhattisgarh by 24 runs in the second match. Pradeep tewari

Arunachal elected to bat first but the visitors had a disastrous start. Shrestha Nirmohi dismissed Shashwat Kohli (4) in the very first over of the innings. Akhilesh Sahani (5) was dismissal by Jaskarandeep Singh in the second over. Jaskarandeep and Karanveer Singh continued to take wickets at regular intervals. Suraj Tayam (9), Samarth Seth (9), Song Tacho (5) and Techni Neri (0) disappointed with the bat. Uvais Ahmad (27 off 20 balls) was the top-scorer for the side. Rahul Dalal also contributed 26 to take the team’s total to 106 in 20 overs. Jaskarndeep (4/25) was the pick of the bowlers, while Karanveer clinched three wickets.

In reply, opening pair of captain Manan Vohra and Shivam Bhambri gave the team a thunderous start and steered the hosts to victory in the 10th over. Vohra scored 68 off 32 balls, with nine boundaries and three sixes, while Bhambari posted 39 off 23 with the help of six boundaries and one six. —TNS