Colours render meaning, dimension and depth to life. They enrich our view of the world by eliciting a sense of beauty, love, fear, anger, hatred, good and bad, the sacred and the profane. 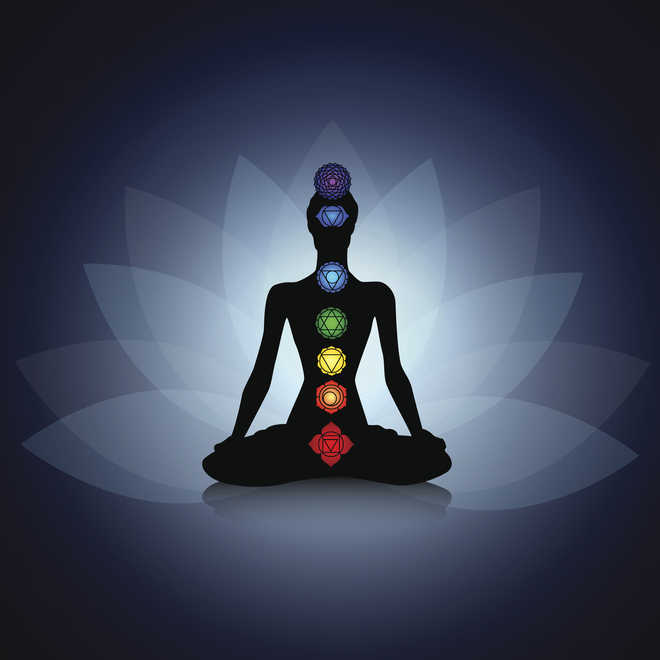 Colours render meaning, dimension and depth to life. They enrich our view of the world by eliciting a sense of beauty, love, fear, anger, hatred, good and bad, the sacred and the profane. Colours radiate energy that resonates with seven main psychic energy centres, called chakras. Each chakra corresponds to a nerve plexus in the  physical body, and reflects  light – in its primary forms as red, green or blue, subtractive primary forms, as magenta (red plus blue), cyan (blue plus green), and yellow (green plus red), or some other, made up of  above colours, in different proportions.

Muladhara: Red, having the longest light wavelength, is associated with Muladhara or root-chakra, situated at the perineum. It governs the vitality of the physical body, and relates to survival. Among the many shades of red, Muladhara is associated with crimson red, symbolic of physicality. When one is sick, red is tinged with dull-black; in pain or coarse passion, it is scarlet or cordovan red; in anger and greed, it is cloudy-red or carmine.

Swadhishthana: Vermillion is associated with Swadhishthana or sacral chakra, at the genitals, that vibrates at a deep emotional level, triggering nature’s creative energy. It is the colour of life, reflecting power, pride, passion and identity. Its spiritual aspects are sincerity, self- confidence, self-restraint and self-denial. If full of life-force, sacral chakra is red-orange, orange-red, or of orange colour, according to one’s state of mind. If overactive or unbalanced, due to aggressive feelings, suppressed vitality or negativity, it turns grimy or brownish.

Manipura: Yellow is associated with Manipura or solar plexus chakra, situated between the navel and rib-cage. It stands for wisdom, will power, and optimism. On negative side, yellow is indicative of caution, cowardice, fear or sickness. If solar plexus chakra is strong, it radiates golden yellow - a lofty spiritual state of being. If lacking energy, it develops shades of black or green.

Anahata: Green is associated with Anahata or heart-chakra but also with grey, in modern  texts. Greys are neutral hues ranging from black to white but indicate states of weakness and inconsistency in sacred geometric figures. Puranic and tantric works associate Anahata chakra with golden (Garuda purana), deep red( Shiva samhita) or vermilion (Shat-chakra nirupana) , perhaps because ancients considered green to be complementary to them all. Peter Bishop says in The Greening of Psychology, that the serenity of green ‘needs and holds the shocking energy of passionate red.’Green epitomizes freshness and growth inherent in nature. When the energy of heart- chakra flows upward, it is bright green or pink and evokes higher emotions. When it flows downward it is grey or dark green and reflects fear or baser instincts.

Vishuddha: Blue in different shades and forms is associated with Vishuddha or throat-chakra. Sky blue is symbolic of peace and tranquility; sapphire-blue of finer values like truth and integrity; turquoise (greenish blue), of intuition, dynamism, and creative expression; indigo (deep blue and violet) of trust, harmony and service. Shades of grey camouflage the traits of blue. Smoky- purple has the diminishing aspects of red and blue, representing passion and reason respectively. All these shades and tints overlap one another, communicating  beauty and power of the supreme spirit.

Ajna: Ajna or brow-chakra is the seat of mind, and identified with the third eye. It is associated with white, a mixture of colours of the visible spectrum, and symbolic of purity, humility, innocence and perfection. Brow-chakra is also depicted in purple (Cyndi Dale), violet (Howard and Dorothy Sun), deep blue (Patricia Mercier) or indigo ( Ambika Wauters), all associated with spirituality.

Sahasrara: Sahasrara, or thousand-petaled lotus, at the crown of head, corresponds to the Absolute. It is the final abode of kundalini shakti or serpent power, lying dormant at the base of spine. Shatchakra Nirupana describes it whiter than the full moon. Modern scholars, however, believe that it is violet (Patricia Mercier, Ambika Wauters)), majenta (Howard and Dorothy Sun), or pale lilac, ‘radiating as a beacon of light’ (Jean Hall).

The tone, tint and tenor of chakras keep changing, so does the egg-shaped aura surrounding the human body, visible only to the spiritually awake.

(Dr Kapoor is a noted  educationist, historian and spiritualist)