No. 16 Squadron of the IAF entered the war on September 7, 1965, which marked the beginning of a new phase of war with Pakistan. As I joined the squadron on June 30, 1966, in Gorakhpur, I heard many stories of its successes, experiences and travails. 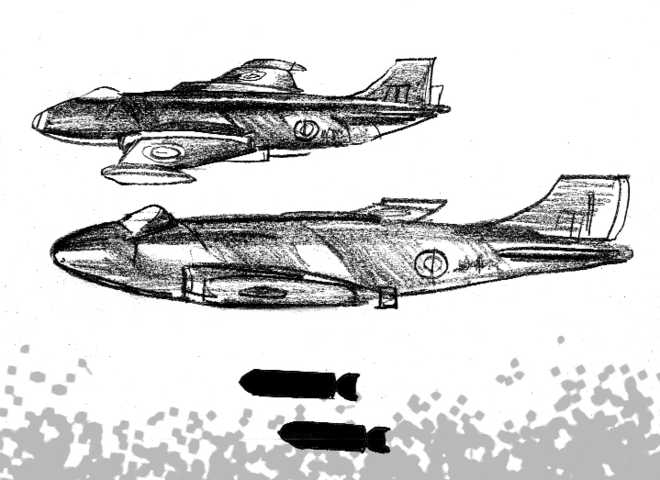 NO. 16 Squadron of the IAF entered the war on September 7, 1965, which marked the beginning of a new phase of war with Pakistan. As I joined the squadron on June 30, 1966, in Gorakhpur, I heard many stories of its successes, experiences and travails.

The Badin raid has remained with me since then. The Western Air Command was aware that the PAF had received sophisticated radars from the US. One of these radars was located at Badin near Karachi.

This radar, apart from assisting PAF fighters in intercepting intruders, was also tending towards strategic interference in the Indian air space. With a view to neutralise it, a Canberra on photo recce photographed this target on September 18, 1965.

The decision to disable the Badin radar was hastened when a PAF Sabre jet on September 19, 1965, shot down an aircraft well within the Indian air space and killed the then Chief Minister of Gujarat, his wife, three members of his staff, a journalist and two crews.

Clearly, the directions had come from the radar controller at Badin. The mission to hit the Badin radar was assigned to 16 Squadron CO Wing Commander Peter Wilson (Pete), who wanted a surprise raid by four Canberra bombers on the target between 7.45 am and 8 am when staff changed shifts at the radar station.

This main interdictor was to approach the target last to strike at the domes. They were separated by about 120 yards. The mission team arrived in Agra, the launching base, on September 20, 1965. On September 21, the first bomber crew comprised Sqn Ldr HB Singh and Flt-Lt GN Bhaskar.

Their aircraft was armed with two 4,000 lbs bombs each. The second bomber crew was Sqn Ldr PPS Madan with Flt-Lt S Karkare and their aircraft was also armed like the first one. The third was Sqn Ldr RS Rajput (Kaddu) and Flt-Lt BV Pathak with six 1,000 lbs bombs and the fourth was Flt Lt RG Khot with Flt-Lt GS Negi with a bomber armed like the third.

They were to take off in this order with a two to three minutes separation and proceed about 20,000 ft initially and then pull up to the bombing height of 10,000 ft above ground and release bombs. The fifth aircraft was flown by Sqn Ldr SP Khanna with Fg Offr KM Joy who was to act as decoy.

Flt-Lt Ashok Bakshi (Joe) and Fg Offr BS Sidhu were on stand by. The anatomy of the raid, however, differed in its occurrence. While the first two groups dropped their bombs as per plan, the third bomber went on to release bombs later. The third crew had forgotten to increase their bomber's speed and as a result they not only saw the fourth one overtaking but also could not see the targets.

Kaddu then manoeuvred the aircraft and dropped the bombs from 7,500 ft as it passed between the two domes. It was at that time he noticed Pete and Shankaran’s Canberra turning right. Pete delivered the crucial rocket “coup de grace”. As per Shankaran’s own clarification to me, in the middle of their planned turn from the IP towards their targets, Pete levelled out early, noticing smoke in the distance, and thus arrived at 30 feet above the ground with the targets on the right and was, therefore, able to hit only one dome successfully.

This first-hand admission from Shankaran, on logical reconstruction, negates several hearsay statements being ascribed to Pete, before he passed away, of having missed the targets on their first run. Also, the other rocket pod did not fire. A strike mission always leaves the actors in doubt while the true damage assessment emerges.

Therefore, the Badin raid was no different. The squadron was gearing up to hit Badin radar again, but the ceasefire was declared on September 23, 1965. Revelations of the Badin success kept emerging as the times passed. A PAF report went on to report the fatality of one of their men. We later learnt that not only the radar had to be replaced and relocated but the domes were also gone.