We have to start talking of the growing acceptance and adherence within India to a puritanical and intolerant form of Islam that is devoid of colour, music or poetry. It’s happening in our country partly as part of a global trend, but also because insecure people alienated from larger society are barricading themselves behind the veil of a much more self conscious Islamic identity. 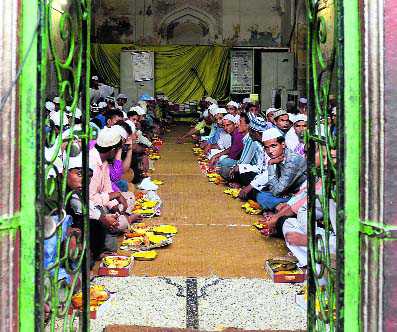 We have to start talking of the growing acceptance and adherence within India to a puritanical and intolerant form of Islam that is devoid of colour, music or poetry. It’s happening in our country partly as part of a global trend, but also because insecure people alienated from larger society are barricading themselves behind the veil of a much more self conscious Islamic identity. This is also part of the unfolding processes in Kashmir, where new identities are being forged and loyalties tested.

But it’s been happening across India. This is not something that can be linked solely to political changes in the country, as the Congress has also played its part in patronizing a particular clerical class that has promoted an exclusivist Islam.

Last week I went to the Nizamuddin dargah in Delhi with four class 12 students including my daughter. The CBSE history syllabus has a chapter on Bhakti-Sufi traditions so I had fixed up some interviews for the kids including one with a young man who proudly carries the name Nizami (they are descendents of families that were companions to the Sufi). He spoke from the heart about the inclusive nature of his version of Islam: this is a place for everyone to worship, he told the students, not just Muslims.

But later in a private chat with me over the backdrop of qawwalis, he said that sadly the Sufi way was being lost, the Wahabi interpretation is gaining ground because of the money and influence they have. Part of the problem I believe is in the condition of the popular Sufi shrines themselves. For instance Hazrat Nizamuddin himself espoused expansive humanist ideas that can be described as genuinely secular.

But what a casual visitor would see today at the dargah is people asking for money at every stage of the worship. People asking for and being given alms is part of the tradition; it is the multitude of rapacious intermediaries to the divine at Nizamuddin and the Dargah at Ajmer, housing the tomb of the founder of the Chisti order, that interrupt any possible contemplation of a higher philosophical tradition. To an extent it is a reflection of the ghettos in which Muslims increasingly live.

Compare this with the cleanliness and order at gurdwaras where the philosophical aspect of the faith is still transmitted. I make this point as Sikhism is often seen as deeply influenced by the Bhakti movement and Sufi-Bhakti impacted each other. Indeed one of the significant saints of the Chisti order is Baba Farid, many of whose verses are included in the Guru Granth Saheb.

But I digress, as my visit to the dargah reminded me of what I learnt earlier this month in Pune, Maharashtra where I had gone for a book release. I was told local residents wanted to have an interaction with me. Around 30 people had gathered, a mix of rationalists linked to the movement of the slain activist Narendra Dabholkar, people who worked with the great trade unionist and social activist Baba Adhav, journalists and writers who were attempting to bring out an independent publication, grassroots workers and just concerned citizens, five of whom happened to be Muslims.

This was a private meeting and concerns were expressed about how low density violence by resurgent Hindu groups, their motivations, political backing, economic underpinnings to the project et all. But a senior Muslim resident of Pune had another concern: the change in his community. There were 200 Muslim families in his village and none of the women were in purdah; now 199 (that only excluded his family) have adopted the veil and have become followers of the Tablighi Jamaat version of Islam that advocates a rigid code for dress, behavior and personal conduct.

Earlier, Muslim villagers would participate in Hindu festivals; now they think that would be “haraam” so stay away. Visiting dargahs is also ‘haraam” as are qawwalis, hence an entire way of worship is being slowly abandoned. A small dargah in his village is now the centre of a property dispute, but many Muslims do not seem to care.

There were three Muslim student activists too born and raised in the small towns and villages of Maharashtra, who spoke of the strain of being trapped between communalism on one side and increasing isolation and puritanism on the other. These were all depressing stories of a changing world. At the same time one of them said that just when so many bad things happen there are so many good people who fight against it. That he said gives him hope that all is not lost.