AFSPA in J&K will remain a bone of contention

The Armed Forces Special Powers Act, (AFSPA) providing special powers to the armed forces, was first invoked on July 5, 1990, when the entire law-and- order machinery collapsed and normal laws were found inadequate to deal with the rising graph of armed militancy. 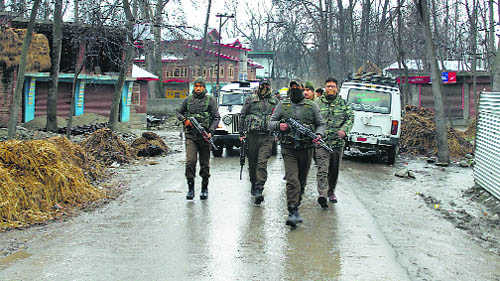 The Armed Forces Special   Powers Act, (AFSPA) providing special powers to the armed forces, was first invoked on July 5, 1990, when the entire law-and- order machinery collapsed  and normal laws were found inadequate to deal with the rising  graph of  armed militancy. At that time, the writ of the government had become virtually non-existent and the terrorists  operating as “mujahideen” (warriors)  had hijacked the  system.

The AFSPA came to J&K in two stages  — on July 5, 1990 and on August 11, 2001. Its continuation is bad news for the state as well as for the image of the country. Many questions are associated  with the AFSPA: Have the Army and other wings of the security forces really turned around the situation  in Kashmir?  If the answer is “yes” , then why is this extraordinary law needed in extraordinary situations still there? The answer is that this is to avert the recurrence of militancy. How long will the situation continue  like this and how long will this law continue to be operative in Jammu and Kashmir? The answer is a euphemistic one:  “Until the situation becomes  favourable .” It is pretty much like Samuel Beckett’s play Waiting for Godot, in which Godot never comes.

A number of vested interests, including politicians who ruled the state ruthlessly, militants by their shooting-and-bombing campaign and sections of media, security forces have played see-saw in Kashmir to keep the Disturbed Area Act and the AFSPA alive for 25 years. All these years, political rulers never attempted to occupy the constituency of  peace the security forces helped to create. They institutionalised corruption, decimated democratic institutions and created a huge divide between the rulers and the ruled.  As a result, the situation never passed  through the touchstone where these laws could go. These laws have not only resulted in the killings, disappearances, sexual assaults but the daily privacy of the masses in Kashmir too has been a casualty.

Ambiguity  shrouds the status of the AFSPA.  The claim is that the “situation has improved” and is improving further. This is backed by statistics. If in 1990, there were 30,000 militants, now the number is less than 300. The AFSPA has been elevated to the status of a holy book, the protective cover of which is needed all the time. That’s a misperception. The political class should understand that unless they deliver, the laws  would stay there.

Since 1989, Pakistan has been bleeding Kashmir by pushing infiltrators from across the LoC or Line of Control  that divides Jammu and Kashmir between India and Pakistan, and the International Border.  There was a decline in infiltration, but it never came down to zero even after the November 26, 2003 ceasefire. So the Army has to channel its resources to prevent infiltration. Internally, politicians have fuelled the alienation of youth and this is provoking them to get attracted toward militancy.  Politicians’ failures and their tendency to tie the hands of security forces have complicated the situation for the Army even in the hinterland.

The new crop of militants wants to operate on a larger canvas. Their symbols have come up with Isis flags and campaigns on social media.  Alongside, a pertinent point to be noted is that the AFSPA has neither helped security forces in bringing complete peace to the Valley nor in averting future threats. The reliance or over reliance on special powers has caused a serious dent in the operational capacity of the Army in tackling infiltration and armed militancy in the hinterland.  The Army has reached a stage  where it cannot think of its role in protecting the national security without the AFSPA. The failure of the politicians to deliver and instead whip up passions against the Army has brought the two institutions in a confrontational mode. In this clash of perceptions , the real assessment of the need for AFSPA is lost.

In 1990, the government was nowhere.  The then Governor, G.C. Saxena, invoked the AFSPA  on July 5. The entire Kashmir Valley and areas within 20-km radius, from the LoC in Rajouri and Poonch districts of the Jammu region  were notified  as Disturbed Areas,  and security forces were given the shield of special powers under the AFSPA. The Act provides a protective shield against any legal prosecution for the acts of omission and commission during the anti-terrorist operations.“This law was needed the most at that time. The Police Act was of no use. The Army could not operate under normal laws. Soldiers and paramilitary forces needed  a protective shield, so this Act was invoked,”  Saxena had told this author, explaining the logic behind invoking the law, which is now termed as “draconian”  by the very same people who had got it into the statue book of the state in July 1990.  It was extended (since August 2001) to the whole of the state, barring two districts of Ladakh. A spate of attacks on vital installations, temples and massacre of minority community members in the state — Jammu and Kashmir is the only Muslim majority state in the country — made the  Farooq Abdullah government, under the pressure of then NDA government, particularly the then Home Minister L K Advani, to extend it to the entire state. There was no need to extend the AFSPA in 2001, but Farooq did so to keep the NDA government in good humour.

Kashmiri separatists, especially  Mirwaiz Umar Farooq and his colleagues in the Hurriyat Conference, were the first ones to ask for the recall of the “black laws” in their meetings with LK Advani on January  22 and in March 18, 2004. They repeated their demand in a meeting with Prime Minister   Manmohan Singh   on  September 5,   2005 and May  3, 2006.

This was later picked up as a swan song  of the PDP and the NC as the two parties, indulging in competitive politics, played  upon  the sentiments of the people. In early 2007, when the PDP  made the recall of the Disturbed Area Act, AFSPA and demilitarisation as an issue to corner its ally the Congress and Chief Minister Ghulam Nabi Azad,  NC’s Omar Abdullah said that the demilitarisation could be  thought of only when there is a return of pre-1989 situation —a cut-off  year  when Kashmir  was peaceful.  Once he felt the heat of politics, Omar also ratcheted-up the  rhetoric.

A sound argument is that there is no harm in withdrawing  this law from the  militancy-free areas. The counter-argument is what if the militants take “safe haven in  DA free districts”. Once the Army goes back to barracks, how can that be brought back to the operational duty if militancy resurfaces?

The answer to this is:  The law can be reintroduced. But the experience of dismantling of  the counter-insurgency grid  in 1999 summer during the Kargil war and also during what came to be known as “ Ramzan ceasefire” (November 28, 2000 to May 31, 2001), is  that the security forces had  to fight hard to regain control and restore peace in the state.

Does this mean that the AFSPA should be there permanently?  The Army and the state  should  assess  the situation realistically. The AFSPA is a must for seven border districts  in the state . For the rest, the politicians and the Army should  take a joint call. Some step has to be taken to get rid of this law. Otherwise, the question remains, what has been achieved in all these 25 years by way of the AFSPA .The  Act  is  a display of hard power.  There is a need  to replace it with soft power generated by democracy.  That’s   not visible on the horizon.

The Armed Forces (Jammu and Kashmir) Special Powers Act, 1990 was introduced in parts of Jammu and Kashmir in 1990, following the beginning of an armed separatist movement for “independence” in  Kashmir.

Under Section 3 of the Armed Forces (Jammu and Kashmir) Special Powers Act, 1990, the state of Jammu and Kashmir (with the exceptions of Leh and Ladakh districts) is classified as a “disturbed area.” Section 4 of this act gives special powers to the Armed Forces, under which all security forces operating in “disturbed areas” of J&K are given “unrestricted and unaccounted” power to carry out their operations, once an area is declared disturbed under Section 3 of the AFSPA, 1990.

It is the Section 4 of the AFSPA which empowers officers (both commissioned and non-commissioned) in a “disturbed area” to “fire upon or otherwise use force, even to the causing of death” not only in cases of self-defence, but against any person contravening laws or orders prohibiting the assembly of five or more persons.

Section 7 of the Act grants almost “absolute impunity” to the armed forces against prosecution in any offence committed by them in accordance with the Act. Under this Section, no prosecution, suit or legal proceeding shall be instituted against the armed forces, except with the previous sanction of the Central government. — Compiled by Ishfaq Tantray