CONTRARY to folklore, the selection of the country’s President is an intensely political affair. 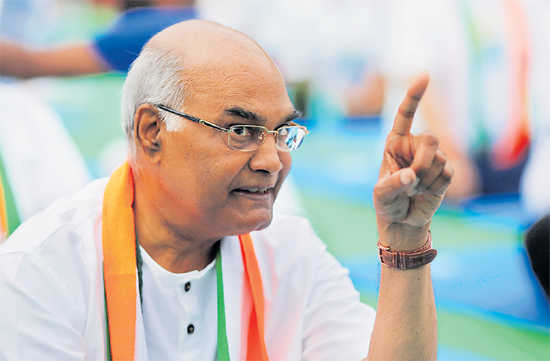 Not the best: Are we condemned to suffer mediocrities as our face to the world?

CONTRARY to folklore, the selection of the country’s President is an intensely political affair. In its long innings, the Congress has played politics in its choices with men of the distinction of S. Radhakrishnan gracing the office in contrast to the nonentities it selected to suit its political requirements. The only occasion there was a consensus on the choice was with Sanjiva Reddy because of the political turmoil then roiling the country.

It is no surprise then that the BJP, in power under its own steam, should play politics with its choice for the highest titular post in the land even while making a show of seeking consensus with the Opposition parties. It was equally clear that in selecting Mr Ram Nath Kovind, a somewhat obscure loyalist with strong BJP and RSS affiliations and a Dalit to boot, it was making a political point and scattering the Oppositiion parties seeking to come together. We had men such as the Congress-appointed Fakhruddin Ali Ahmed signing on the dotted line to bless Indira Gandhi’s Emergency.

Essentially, the BJP had three points to make. One, it was seeking to dispel the impression of being an upper caste and trading community party known for encouraging inter-caste tension and an anti-Dalit cast of mind. Second, it had the general election of 2019 in mind in fielding a Dalit. Third, it struck a blow to Opposition unity, such as it has been, to get Bihar’s CM and JD (U) leader, Mr Nitish Kumar, to defect even before Opposition parties were scheduled to meet.

Thus in immediate terms, the BJP’s tactic has paid off. The Opposition parties were reduced to naming a Dalit, Ms Meira Kumar, the former Lok Sabha Speaker, to make a symbolic fight knowing full well that the BJP’s candidate had the votes, now with the maverick Shiv Sena and the JD (U), among others, on board.

Yet the pity is that the Congress and the BJP when in power play political games for their parties’ advantage when the country should choose a towering and recognised personality to represent the country with distinction at home and around the world. This comes at the cost of India’s image PM Modi’s government is otherwise so adept at creating.

Mr Kovind, despite his experience and record, is nowhere near the ideal President the country deserves. In the process, India is missing out on projecting its true potential to the world. Instead of chalking out a bold course in contrast to Congress practice, the BJP has chosen to copy it to select a well-meaning slogger because of his caste to keep alive the concept of Hinduising India.

By all accounts, the RSS played a key role in the final stages of making the choice. The nature of the organisation being what it is, its single-minded devotion to creating a Hindu rashtra cannot be faulted. Rather, the RSS underpinning in the BJP and in the government’s staffing at the national level and in the states is such that it has a stranglehold on policymaking.

Mr Modi’s choices are therefore limited. He must put up with men like Yogi Adityanath as his party’s CM in Uttar Pradesh as with the other red lines drawn by the RSS in areas closest to its heart. The choice for President was one such red line and like a faithful member of the RSS, as he once was, Mr Modi capitulated.

The office of President has evolved over the decades as has the role of Governors. Its past splendour has a hollow ring today, with more and more holders of office being proxies of the ruling power, rather than following the spirit of the Constitution in exercising an oversight over the government’s actions and policies. There have been exceptions, for instance KR Narayanan, who have expressed reservations and displeasure over particular policies. Even more than those holding the President’s office, Governors as a rule are proxies of the ruling party at the Centre.

Indeed, there can be a valid case for the abolition of Governors’ office, substituting it by an administrative mechanism serving the same purpose without the expense and formalities involved. But the country still needs a titular head as a symbol and a meeting point for all its citizens. As is clear from the latest decision of the ruling party, that symbol is well on the way to oblivionn greatly aided by the record of the Congress.

Is the country so engulfed in partisan politics that even a party with a majority of its own in the Lok Sabha after three decades cannot chart a new course to keep the office of President above political horse trading? The BJP apparently thinks in electoral cycles to complete its dominance over national politics. The Oppositiion parties, particularly the Congress, are too shell-shocked by the scale of their defeat in recent elections to concentrate on national objectives.

The traditional remedy offered by the wise is to turn to civil society. But it has proved to be a broken record time and again. Unless provoked by a victory or defeat on the cricket field or touching the heartstrings, as in the case of the aspiring self-made woman who was brutally raped and died, civil society stays silent more often than not. The choice of the President is not evocative enough to excite passion except among the political class that lives in its own bubble.

Are we therefore condemned to suffer mediocrities as our face to the world? The Congress is more culpable on this score than the BJP’s rather recent acquisition of power. But the BJP cannot escape censure because it is in a sense the new avatar of power long exercised by the Congress. It must distinguish itself not merely by seeking a cleaner India but in getting rid of the cobwebs of the past by introducing a healthier set of political principles.

The choice of Vice-President remains open and we must await the next surprise the BJP has to offer. This much is clear. Mr Hamid Ansari will be a hard act to follow.