Distressing trends in our democracy : The Tribune India

Distressing trends in our democracy

THERE have been rough patches in the functioning of parliamentary democracy in India — the roughest was of course the Emergency of the seventies — but seldom has the functioning of the two Houses been held hostage to serve partisan party purpose quite in the manner we are witnessing. 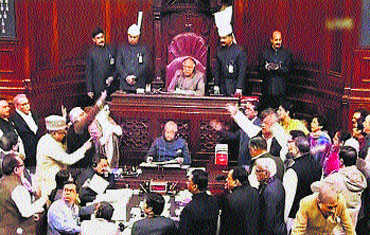 How will order be restored?

THERE have been rough patches in the functioning of parliamentary democracy in India — the roughest was of course the Emergency of the seventies — but seldom has the functioning of the two Houses been held hostage to serve partisan party purpose quite in the manner we are witnessing. Besides, the level of public discourse has reached a new low.

There was the infamous boast of Ms Sushma Swaraj, then in the Opposition, before the beginning of a session that she would not let Parliament function for a day until her demands were met. And she proved true to her word. That benchmark has not been breached but the sorry spectacle of the Congress, seeking to emulate Ms Swaraj has presented an unedifying spectacle.

The Indian political world is out of joint. With all its imperfections, democracy has been functioning and a central part of the system has been Parliament. Prime Minister Narendra Modi in his avatar as chief minister of Gujarat succeeded in marginalising the state Assembly in achieving his goals, but this method cannot be replicated at the national level.

Indeed, we have reached the point when blaming one party or the other will not lead us anywhere. Rather, the need of the hour is to evolve a new consensus among all parties that disrupting Assembly or parliamentary proceedings is taboo. And civilised political discourse must have limits. The terminology employed by the Delhi Chief Minister, Mr Arvind Kejriwal, in scoring points against Prime Minister Modi was reprehensible.

What has led to this sudden explosion of invectives and tempestuous parliamentary proceedings that mocks the Westminster model we have borrowed. Nobody expected the Indian system to work quite like the British model. But Jawaharlal Nehru and his colleagues, many of them Western-educated and -influenced, did try to maintain a measure of decorum. The homegrown lot who followed the first generation of rulers did not hold legislatures in similar reverence.

A second reason for the turmoil and high-pitched verbal battles is the change of government in New Delhi. Mr Modi is a combative leader and does not follow the rules of the game. As Prime Minister, he has been the principal campaigner for his Bharatiya Janata Party in state Assembly elections, injecting bitter personal attacks on his political opponents to create a confrontational atmosphere.

The shrillness of the debate is also due to the travails of the Congress, a party whose perennially-in-waiting leader Rahul Gandhi has proved unequal to his task. With Ms Sonia Gandhi still seeking to groom her son for leadership, the party is, in a sense, leaderless.

There is no short-term prospect of a solution to the prevailing crisis because there is no overarching leader in the shape of a Mahatma Gandhi or a Jayaprakash Narayan who can knock heads together. The intelligentsia or the middle class is too feeble to call squabbling parties and leaders to order.

Logically, the Prime Minister, who is the leader of the country, should take the lead in calling for a reversion to more civilised norms of public debate and functioning of Parliament. But he himself is a combatant and his public persona does not lend itself to a meaningful mediator’s role.

Who then will bell the cat? Willy-nilly the intelligentsia must give the lead, despite its weaknesses. Indeed, the only solution is to help create a mass movement that will compel our legislators to earn their keep and perform the tasks they were elected for. There must be financial penalties for disturbing parliamentary and Assembly proceedings and citizens’ committees to police legislative proceedings. We could have the equivalent of lok adalats to assess individual and collective performance. If this portends direct democracy, so be it.

We must treat the prevailing crisis as a national emergency. It is fashionable to make light of the squabbles and name-calling in the functioning of our legislatures but their consequences can be deadly. It is true that many members of the middle class are more comfortable in holding armchair discussions than in leading a movement, but they must now rise to the occasion to lend their resources and skills to reform the political class.

Television has a special role to play in this campaign because of its reach and the nature of the beast. It is inherent in the medium to highlight squabbles and confrontations, which take up a disproportion amount of space. Yet as responsible members of society, TV bosses must annotate their visuals with meaningful discussions and commentaries condemning the misdemeanours of all parties.

Writers made themselves heard recently by returning their awards as marks of protest against growing intolerance in the country.  They have an even more important role to perform in highlighting the back-breaking cost of non-functioning legislatures and Parliament to the public exchequer. Legislators are not doing a favour by performing the tasks they were elected for.

All politicians must also recognise that name-calling and use of vulgar language redound to their discredit. They do no credit to him and her and the political party he or she belongs to. In recent times, the level and frequency of invectives are becoming something of an epidemic.

If Mr Kejriwal calls himself an anarchist, he has no place as the leader of a party in the legislature or the chief minister of a state. Anarchy and parliamentary democracy do not go together. If his self-description was more in the nature of a populist slogan, he should be more careful in expressing his feelings and refrain from crossing the red line in abusing the Prime Minister.

This vital distinction has been blurred. It is therefore the duty of the middle class and all thinking men and women to show our politicians the way.

Cough syrups by India's Maiden Pharma potentially tied to deaths in Gambia: WHO

Director-General Ghebreyesus recommends all countries should...