First clean up the caste and sanitation equation

Why do we still need sanitary workers? The Government should spend enough money to mechanise the processing of waste rather than using human beings to clean up. The public should be encouraged to segregate waste before disposal and the law enacted to stop manual scavenging should be adhered to. 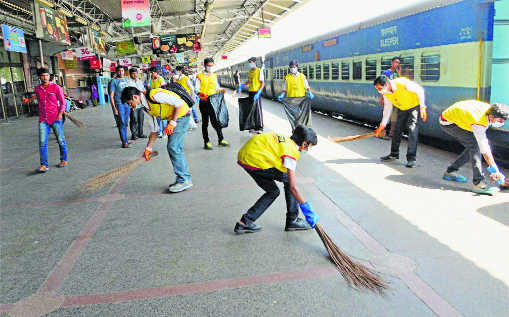 Contrary to the ban on manual scavenging, the Indian Railways is the largest public sector enterprise to engage sanitary workers to clean up the tracks. PTI

CLEANLINESS  is about keeping oneself clean and disposing of one's waste safely. After disposal, municipal workers are usually engaged to process and recycle the waste.  In India, sanitary workers are required for all three stages — disposal, processing and recycling. This is embedded within the idea that waste in India should be left to one particular caste. Even government agencies, while recruiting sanitary workers in municipalities, search for the “traditional” castes associated with sanitation for cleaning. In 1999, following a devastating cyclone in Orissa, 2,00,000 animal carcasses were left lying in the open.

The government officials approached locals to remove these carcasses for a higher pay. A villager responded, “I have some self-respect left”. The officials flew 200 sweeper caste members from New Delhi for the work. (Spartanburg Herald -Journal November 12, 1999) The change of behaviour over sanitation not only affects the public but, more importantly, affects the government too.

Mahatma Gandhi, while talking about sanitation, stated, “I call scavenging as one of the most honourable occupations”, (Harijan 1934) In the more recent past, Mr. Naredra Modi said, “Scavenging must have been a spiritual experience for the Balmiki caste.” Both associated scavenging with one particular caste, as prescribed by the caste system. In order to have a clean India, it is deemed necessary to unread the caste system and engage all castes in sanitation.

The Indian state agencies, along with the public, have to be encouraged to process the waste before disposal. It seems a difficult proposition, even through the present Clean India Campaign, to achieve such a goal. The recent photo ops do not engage with waste before disposal, but rather encourage cleaning, an activity which follows disposal of waste.

The Swachh Bharat Abhiyan's objectives are to achieve a clean and hygienic India by 2019. The programme was launched in memory of Gandhi's attempts at inculcating cleanliness. If Gandhi's cleanliness drive focused largely in safe disposal of others’ human waste, the present Government’s cleanliness drive focuses (at least as suggested by the photo ops) in cleaning the others' garbage, following the path of a vast entourage of celebrities.

Many programmes since Independence focused on the safe disposal of human waste, but only failed in attaining its goal as it limited its approach. The recent campaign evades the caste question and focuses more on removing others' garbage in cities. To attain a clean India many have voiced that a change of mind over sanitation work is an important task.

Waste can be largely classified into two types, human (faeces) and domestic, categorically termed as municipal solid waste. In India, disposal of human wastes can be classified into dry latrine, wet latrine and open defecation. Dry latrines are those which require human effort to remove and carry excreta to the nearest place for disposal. The process of disposal is called manual scavenging, an act which was legally banned in India under the 1993 Act.

Contrary to the ban, Indian Railways still remains the largest public sector enterprise to engage sanitary workers to remove excreta left on the railway tracks. Wet latrines are those connected with water pipes leading to either sewage lines or septic tank, which are usually emptied either using sanitary workers or through pumping. The pumping charges  are very high, so largely people use sanitary workers to clean the septic tanks. Indian cities do not have an underground drainage system rather it merely has a pipe which carries the sewage. Due to the insanitary disposal of waste in the drainage, most of the time, the drainage pipe gets blocked and to clear the blocked pipes, manholes are provided at the junctions of two or three pipes. Any blockade in the manhole requires sanitary workers to clean manually. However, as waste generates toxic gases (including methane and ammonia), many sanitary workers have died in the process of cleaning drainage pipes. The manual cleaning of manholes is also banned under the 2013 Manual Scavenging Act, but the practice prevails and often we read about sanitary workers dying in manholes. Open defecation is an issue which seriously impacts health, and the present Swachh Bharath Abhiyanprogramme, like several earlier programmes, aims to eradicate open defecation by building toilets.

However, the campaign hardly addresses the present sewage problem all cities face. With an increase in the number of toilets, the capacity of sewage lines should also be increased, a fact which has completely escaped the planning of the current campaign. Domestic waste can be classified broadly into biodegradable and non-biodegradable. The increase in the population in cities has also increased the quantity of waste to be disposed of. Due to unsafe and inefficient disposal of waste, we find garbage strewn across cities. Landfill sites are overflowing with no space to accommodate any more waste.

Apart from obvious health reasons, the perpetuity of garbage in cities also remains an aesthetic concern. To deal with this, many programmes were introduced in the past; the Municipal Solid Waste Management, (MSW) for example, in 2000. Under this scheme, the municipalities removed all permanent bins installed at public places and installed mobile bins with two compartments, biodegradable and non-biodegradable. However, without proper initiation, the public disposed waste as they did earlier, without segregating it first. The municipality carried its routine work and kept burning the waste in the landfill site, rather than segregating and recycling it. In western countries, the household waste and the shop waste is segregated and wrapped in different bags and kept in a bin. The automatic truck collects the waste and dumps it in landfill sites where machines are engaged to process the waste. According to the MSW rule in India, a householder should segregate the waste, for which municipalities provided separate bins for biodegradable and non-biodegradable waste.

S/he then keeps the gunny bags in a common place where the truck will collect the non-segregated waste from and dispose it at the landfill site. Here people are engaged to process the biodegradable waste for converting it into fertilisers. The non-biodegradable waste is processed further and recycled. With growing waste and fewer people employed in the landfill sites, it is difficult to recycle all the waste. Hence only a portion of waste is segregated in most municipalities. The Government should spend enough money to mechanise the processing of waste rather than using human beings and encourage the public to segregate waste before disposing it of. Laws enacted by the government  and the rules prescribed in the Swachh Bharat Abhiyan should be followed.

The writer is a Fellow at the Indian Institute of Advanced Study, Shimla