INDIA was only 18 months old as a state with nuclear weapons when it first put out a draft nuclear doctrine into the public domain. This document clearly established guiding principles for what its nuclear capability meant for India. The country defined a narrow role of nuclear deterrence for itself. 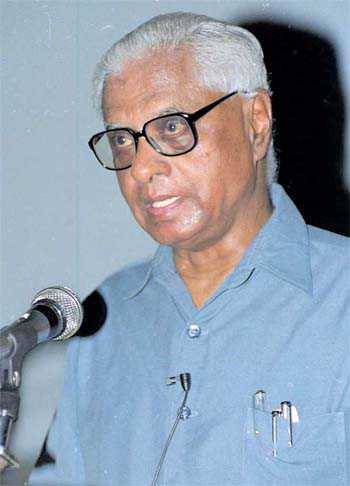 K.Subrahmanyam was a key figure in framing and influencing Indian security and nuclear policy and a champion of India''s nuclear deterrence.

INDIA was only 18 months old as a state with nuclear weapons when it first put out a draft nuclear doctrine into the public domain. This document clearly established guiding principles for what its nuclear capability meant for India. The country defined a narrow role of nuclear deterrence for itself. It eschewed the idea of nuclear war fighting. It mandated a credible minimum deterrence capability that would ensure unacceptable damage to the adversary.

The doctrine also laid down the peacetime deployment posture of the arsenal, besides identifying circumstances for the use of the weapon. In 2003, these major attributes of the draft doctrine were granted official endorsement when the government of the day issued a Press note on the Operationalisation of India's nuclear doctrine.

Since 2003, the government has not brought out another document to either revise or further explain the nuclear doctrine in any way. However, it has become fashionable to parse every single nuclear word spoken or written by a serving/retired government official, or in a government document.  Umpteen nuclear experts immediately take out their microscopes to read hidden meanings behind words. Profound signals are read in between the lines. In this process of hair splitting, however, the big picture is lost.

A new storm brews in the nuclear teacup in the context of the nuclear issues mentioned in the just-released "Joint Doctrine of the Indian Armed Forces (JD-2017)". Chapter four of the doctrine that deals with higher defence organisation has a section on Nuclear Command Authority. Some analysts have been quick to point out that the Joint Doctrine uses the terminology "credible deterrence" instead of "credible minimum deterrence" as has been originally used in India's nuclear doctrine.

The change being hinted at in the Joint Doctrine 2017, however, is a misreading of the sentence. Para 20 of Chapter four actually reads, "The defining issues for Nuclear C2 (command and control) is to maintain a credible deterrence; no first use; civilian authorisation; and dispersed arsenal structure to ensure option to retaliate is available".  As is evident, the sentence is defining the characteristics of nuclear command and control, not of the doctrine. Obviously, the nuclear command and control should maintain credible deterrence, not credible minimum deterrence. The latter applies to the nuclear arsenal or the numbers of warheads and delivery systems that India intends to build. The Indian nuclear doctrine defines arsenal requirements as minimum, as distinct from the maximalist nuclear build up that the Superpowers indulged in during the Cold War period.  India believes that it needs just enough a nuclear force to ensure unacceptable damage to the adversary.

Credibility as it applies to the nuclear force structure is quite different from the credibility as applicable to the nuclear command and control structure. The first can be credible minimum; but the second must be nothing less than credible. In this context then, the words as used in the JD-2017 are appropriate. The document, in fact, makes no mention of the kind of arsenal or the force posture that India will have. It only refers to the nuclear issue in the context of the command and control structure as it fits into the higher defence organisation.

It is true that governments use doctrines to signal. The JD 2017 does so too on some issues. Most pertinent amongst these is the recognition of surgical strikes as a means of dealing with terror provocations, the mention of expeditionary and overseas operations, or the call for increased interoperability with other countries. But on the nuclear issue, the doctrine signals nothing except describing the nuclear C2 structure, the contours of which have been known in the public domain since 2003.

It draws attention to the fact that an "effective and survivable C2 with requisite flexibility and responsiveness is in place" and that it ensures "an effective interface between civilian and military leaders." It also reassures that "alternative chains of command for retaliatory strike exist for all eventualities."

The JD-2017 also mentions that the Strategic Forces Command (SFC) is the operational arm of nuclear command and control, and is the controller of all nuclear warheads and delivery systems. None of this information is new. And there really is no signal to be read here except to be reassured by the knowledge that India has a robust command and control system to manage its nuclear forces and to uphold deterrence against any nuclear misadventure.

India's declared nuclear doctrine has enunciated sound guiding principles for deterrence. The country should have no reason to abandon "minimum", since credible nuclear deterrence is not dependent on large numbers of warheads and delivery systems. Software requirements such as indication of resolve of the leadership to take hard decisions are as critical. Nuclear C2 is the bridge that brings the two together. The knowledge of its robust existence makes for credible deterrence even more than the knowledge of large stockpiles.  JD-17 has only highlighted the existence of this important dimension.

The writer is a Senior Fellow, Centre for Air Power Studies, New Delhi