IT’S surprising, if not alarming, that we don’t know the exact number of laws that criminalise actions and provide for punishment in India. 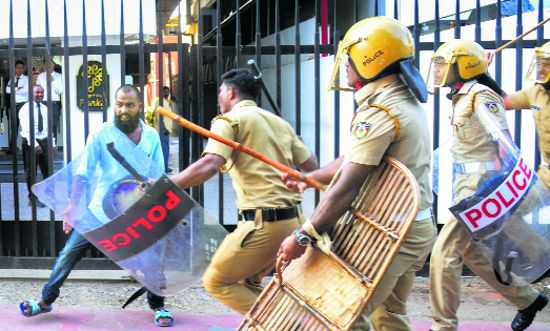 Repressive: Arrests are found to be illegal in a huge number of cases.

IT’S surprising, if not alarming, that we don’t know the exact number of laws that criminalise actions and provide for punishment in India. Rough estimates range from 12,000 to 1.5 lakh. But, for sure, we have more laws than we require. Many laws mean many crimes; it also means ‘overcriminalisation’. The R Ramanujam Committee (2014) observed the existence of 2,781 laws in the central statute book. This Committee and the Law Commission have been recommending the repealing of many laws which have become redundant.

Reportedly, more than 350 statutes in India prescribe punishment of varying nature. There are also many civil laws which stipulate criminal sanctions. These matters relate to family, allowances, land, consumers, housing environment, marriage, maintenance etc. Several laws have outlived their purpose. Repealing of the obsolete laws and review of the existing ones has become crucial as these have the scope for misuse.

Criminal law ought to be the last resort in a constitutional democracy. It should not be invoked unless there are compelling reasons to do so. The opposite is happening in this country. Criminal law is routinely exercised. Arrests are not only increasing, but are also found to be illegal in a huge number of cases. Repressive criminal law and the penchant to criminalise is also visible from the unusually high instances of arrests in drug offences under the NDPS Act (about 2,600 in 2016) and 2,700 arrests under a stringent law such as the Unlawful Activities Prevention Act (UAPA). The Armed Forces Special Powers Act (AFSPA) was responsible for the killing of about 3,000 persons in the past 25 years.

Several laws or their provisions are perceived to be considerably misused as these often result in unprincipled criminalisation. AFSPA, UAPA, Sections 498-A, 144 and 34 of the IPC, provisions of the Prevention of Atrocities Act, Dowry Act, NDPS Act etc. have contributed a big share of illegal or excessive arrests. Rape will now attract a jail term of seven to 20 years; rape under the Protection of Children from Sexual Offences (POCSO) Act will attract death penalty. Key examples of the mindless application of harsh criminal laws and resultant wrongful arrests, prosecution and even conviction have been recently authenticated in Report No. 277 of the Law Commission of India. The number of undertrials (2.8 lakh, two-third of the total prison population) in the country is the perfect example of criminalisation without any outcome.

The intrusion of the State into the lives of people through criminal law has drastic implications for the constitutional rights. The State does have the authority to label some acts as criminal. But, as was held in the Naz Foundation and Navtej Johar cases, the policy of criminalisation must follow constitutional morality and the values enshrined in it. Ignorance about the accepted principles of criminalisation or decriminalisation is appalling. Nor do we find any serious debate on this issue in the policy or public domains.

Criminal sanction is the most drastic of the State’s institutional tools for regulating the conduct of individuals. As such, it should be employed only where supported by convincing justifications. These justifications have been devised in the form of certain principles that are universally recognised and accepted in the criminal justice system.

Important aspects of criminalisation include autonomy and the harm principle. While the former rests on the idea that a person is autonomous and exercises free will and hence any act by him would create a liability on his part, the latter makes sure that the State is justified in intervening coercively to regulate conduct only when that conduct causes or risks harm to others. According to the harm principle, proponents of a given criminal prohibition cannot simply allege that the relevant conduct is immoral. Rather, they must identify the particular effects of that conduct: the way in which it damages the lives of other persons. Only those acts that produce the risk of harm to the public at large need to be censured. This was the guiding principle behind decriminalisation of adultery and Section 377 (unnatural offences) of the IPC.

The act of criminalising any conduct must first address the historical roots of society and the roots of criminal system in that society. This is precisely what was done by the Supreme Court while adjudicating on the constitutionality of the adultery law, stating that the law had specific historical discrimination linked to it, and it failed the present mores of society.

However, even if it is established that a certain moral wrong is a public wrong, the process of criminalisation shall only be undertaken when other civil measures and legal regulations have considerably failed to bring deterrence with regard to the wrong. This is the principle of legal moralism which is being debated upon with regard to the criminalisation of triple talaq.

At all times, we must be aware of these principles, which are definitely not exhaustive, while shaping our opinion upon any decision to criminalise or decriminalise a particular act. These decisions cannot be taken on the basis of the morality of a few, especially at a time when we are moving towards transformative constitutionalism.