INDIA lost no time to welcome the Afghan government’s call on February 28 “to armed groups to cease violence and join national peace and reconciliation process”. 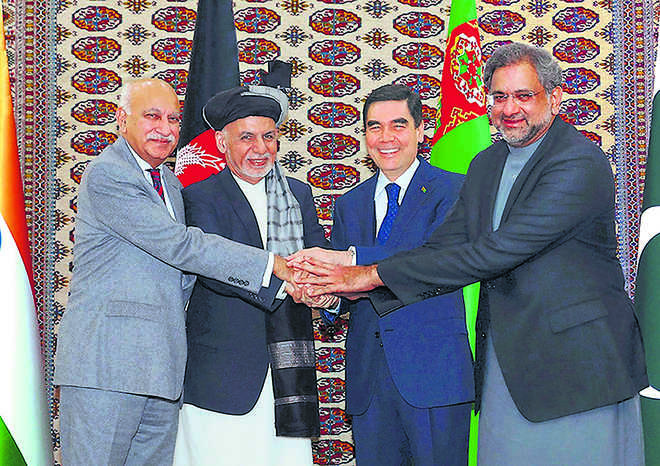 On same page: Consensus among major powers would be key to lasting peace.

INDIA lost no time to welcome the Afghan government’s call on February 28 “to armed groups to cease violence and join national peace and reconciliation process”. India also added the caveat that “there can be no compromise with terrorism and action must be taken against those who continue down the path of violence and those who finance them and provide safe havens and sanctuaries”. The caveat is well grounded. However, there is also the “big picture” sailing into view, which India cannot ignore.

If a timeline is needed, it could be mid-January when US Acting Assistant Secretary of State Alice Wells and a three-member team of Taliban negotiators headed by Shahabuddin Dilawar landed in Islamabad for consultations simultaneously. Some evidence is available in the testimony last week in Washington by Gen Joseph Votel, Commander, US Central Command, before the House Armed Forces Committee that behind the cloud cover of nationalist rhetoric, Pakistani army chief Gen Qamar Javed Bajwa had begun “delivering”. Gen Votel noted, “Recently we have started to see an increase in communication, information sharing, and actions on the ground (by Pakistan) in response to our specific requests — these are positive indicators.”

The progress must have been appreciable because the Taliban switched to public diplomacy on February 14 with a letter of the Islamic Emirate to the American people, making a passionate appeal to the “logic and conscience” of the great American people that the Taliban “can solve its problems with every side through healthy politics and dialogue…and can play a constructive role”. On February 23, the Taliban reaffirmed this by welcoming as “good news” the commencement of work on the Turkmenistan-Afghanistan-Pakistan-India (TAPI) gas pipeline project. Curiously, the Taliban claimed TAPI as its legacy — a pointed reminder of the Faustian deal between the Taliban regime and Unocal in the mid-90s with patronage from the Bill Clinton administration.

On February 26, the Taliban followed up with a formal proposal to hold direct talks with the US. Interestingly, this proposal coincided with the arrival in Islamabad of the Deputy Assistant to the US President and the National Security Council’s senior director for South and Central Asia, Lisa Curtis, on an overnight visit. According to the US embassy readout, Curtis expressed interest “to move toward a new relationship with Pakistan” and emphasised the “opportunity to work together”.

Clearly, Afghan President Ashraf Ghani did not conjure up from thin air his peace initiative of February 27 offering Taliban a ceasefire and release of prisoners, recognition of the group as a political party, constitutional review and unconditional negotiations — plus an overture to Islamabad to “forget the past and start a new chapter”. The US’ imprimatur is self-evident. Ghani is in a beleaguered position and lacks a base in the Pashtun heartland. The weariness and anger coursing through the country is palpable. The Trump administration understands the futility of waging a war under an Afghan government whose legitimacy is wearing thin. Elections are needed urgently, but cannot be held unless there is ceasefire, since insurgents are active in 70 per cent of the country and continue to expand their reach. The best American hope lies in co-opting the Taliban under a new leadership in Kabul where the US retains influence.

Suffice to say, the moment of truth is approaching for the Indian policymakers. Ghani’s unconditional peace offer didn’t differentiate the Haqqanis who constitute Taliban’s “steel frame”. On the other hand, Ghani skipped the other contentious issue — the US occupation of Afghanistan. In the American scheme of things, the non-negotiable part narrows down to a single point — the military bases in Afghanistan. A tradeoff is entirely conceivable. The US is willing to concede that Islamic legitimacy is essential for any Afghan government. Evidently, the US regards it to be imperative that the Taliban do not gravitate to the Russian and Iranian orbit. Again, Pakistan’s cooperation being vital, its interests need to be accommodated. But then, the US views China to be a benign partner and Beijing has influence over Pakistan. Significantly, China has “highly appreciated” Ghani’s peace offer and urged the Taliban (“relevant parties”) to address differences through consultation and dialogue. Arguably, the US and Chinese interests can be congruent apropos the economic rise of continental and South Asia — that is, in securing investments in connectivity and integrating Afghanistan into the connective networks.

To be sure, Pakistan has managed the relationship with the US through a trying period. The Pakistani elite is determined to have a relationship with the US, notwithstanding the longstanding ties with China and the warming up with Russia. A relationship with Russia cannot substitute for the far more important diplomatic, economic and security relationship with the US. Of course, there are significant hurdles to overcome, but international recognition of the Taliban as a legitimate Afghan entity has been an elusive objective that Pakistan keenly sought through the past three decades. Being the best organised and cohesive group by far in the highly fragmented Afghan polity, the Taliban can aspire for a leadership role in a broad-based government under a new constitution. Pakistan also holds the permanent advantage of its unique geography, which attracts big powers without exception.

However, peace can only come with all the major powers and neighbours of Afghanistan on board. And cooperation in Afghanistan between big powers is necessary. The conference in Tashkent in March, mentored by Washington, creates a regional platform for consensus-building. Russia can contribute massively to peace in Afghanistan. So can Iran. Hopefully, the Tashkent process can break the vicious cycle — Taliban seeking talks with Americans while taking instructions from Islamabad, and the Kabul government seeking peace talks under tutelage from Washington.

No doubt, the US’ terms of engagement with Pakistan impact Indian interests. Coinciding with Ghani’s olive branch to Taliban (and Pakistan) and Curtis’ arrival in Islamabad, US State Department spokesperson stressed last Tuesday that India and Pakistan should “sit down and have talks” regarding issues relating to their border tensions. The bottom line is that while it may appear that a paradigm shift is under way, in reality, maximalist definitions still motivate Pakistan’s approach. Therefore, Washington’s expectations will put pressure on India. But then, with a crucial election year looming ahead, will the Modi government be in a position to show flexibility? Certainly, while India’s articulation of support for Ghani’s peace offer to the Taliban makes a goodwill gesture, difficult decisions are needed in Delhi by way of making adjustments in India’s regional policies. A leap of faith is needed for turning challenges into opportunities to improve India’s relations with both China and Pakistan.