Aweek in Sri Lanka last month provided an illustrated account of the run-up to the 2019 presidential election. 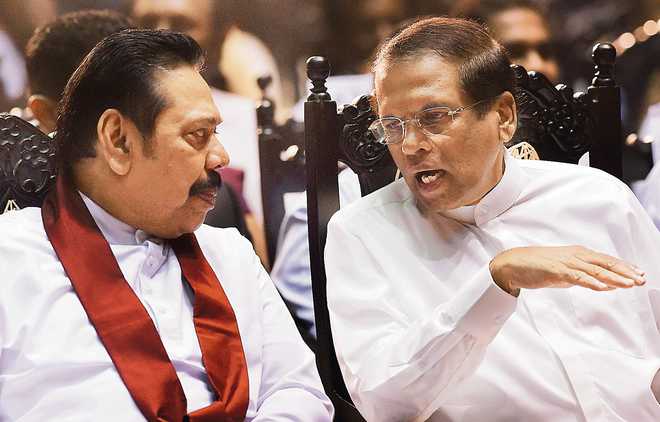 Aweek in Sri Lanka last month provided an illustrated account of the run-up to the 2019 presidential election. The last time, it was Rajapaksas versus the rest. This time, too, the same alignment could play out, except that it is younger brother Gotabaya, not Mahinda Rajapaksa, who will be the opposition SLPP  (Sri Lanka Podujana Peramuna) candidate. Anti-incumbency and a slothful record, including the Easter bombings, of the United National Party (UNP)-led government, which has not named its candidate, puts Gota as the frontrunner today.

Sri Lanka’s unique contemporary achievement has been ending comprehensively the military conflict against the LTTE in the predominantly Tamil north and east, though without addressing the root causes of the ethnic issue. The enviable claim that there has been no terrorist attack since 2009 was rudely shattered by the Easter Sunday suicide attacks and sounded alarm bells that another internal conflict, this time against Muslims, might be in the making. The 1978 constitution heavily weighed in favour of the executive president (and Sinhalese Buddhists) which all presidents have pledged to abolish, is the raison d'etre for the political and ethnic eruptions in the country. Political co-habitation between the president and prime minister has just not worked. Mahinda Rajapaksa was the last President to use his all-powerful office to his advantage. He won the war, but antagonised the western community and India by cosying up to China. An unlikely coalition of rival parties SLFP (Sri Lanka Freedom Party) and UNP, cobbled up by incumbent President Maithripala Sirisena and supported by Prime Minister Ranil Wickremesinghe, defeated Rajapaksa and led to the formation of the first National Unity Government which began to unravel two years ago.

The conflict and power struggle climaxed when Sirisena, in a constitutional coup, dismissed Wickremesinghe and appointed Rajapaksa as Prime Minister. The theatre of the absurd played out for 52 days when the supreme court reinstated Wickremesinghe in December 2018. The conflictual relations between the executive head of state and head of government has led to total dysfunctionality in governance and was the main reason for the terrorist attacks. Two parallel enquiries investigating the bombings have been ordered by the President and Prime Minister.

Let's be clear: both the President and PM have insisted they had no prior information about the bombings. The rift between Sirisena and Wickremesinghe climaxed when Sirisena asked his defence secretary not to invite the Prime Minister to the NSC meetings. Former Defence Secretary Kapila Waidyaratne is the latest to confirm this in his testimony to the parliamentary commission.

Political instability has taken its toll on the economy. Tourism has been crippled after the suicide bombings and caused a loss of INR 20 billion. Lonely Planet had declared Sri Lanka the biggest tourist destination in 2018.

Happily, the political impasse is being broken by presidential elections to be held on or before December 7. A new President and PM have to be in place by mid-January and August 2020. Sirisena has said he would be a one-term president. But then, power being a big aphrodisiac, he is playing both sides for his legacy’s survival. His future is uncertain though the SLFP may field its own candidate. The UNP will contest presidential elections in a major alliance, the National Democratic Front whose agenda is national security, democracy and economy. The UNP's rising star is the youthful Sajith Premadasa, minister for housing and construction. He is the son of former President Ranasinghe Premadasa who was assassinated by the LTTE. Sajith could set the precedent for father and son becoming President of Sri Lanka. But his nomination is contested by Wickremesinghe.

The SLPP is on a high after sweeping the local body elections of February 2018. That Gotabaya Rajapaksa would be the presidential candidate had been doing the rounds for some time, but his dual citizenship, corruption and human rights violations cases in court were blocking his candidature. The first two hurdles are believed to be out of the way. Like his elder brother, Gotabaya a former colonel, is a strong and ruthless leader, remembered for synergising the war victory as defence secretary. He is a better-known face than Premadasa, but carries the baggage of war excesses.

The catastrophic handling of the Easter Sunday bombings by the fractured ruling coalition will provide Gota, if he wins, an opportunity to reset the country's intelligence and counter-terrorism grid. But there is more to national interest than just national security. India was integral to an international effort in 2014-15 to dislodge Mahinda Rajapaksa, seen to be uncomfortably close to countries like China, Pakistan, Russia, Libya and North Korea. It was during his regime that China was able to spread its tentacles across south and central Sri Lanka with connectivity projects — ports, airports, expressways and an upcoming commercial city — and enhancing political and defence cooperation. The first Chinese submarine docked in Colombo Port during the Rajapaksa era. Entrapped in Belt and Road debts, Sri Lanka has had to lease Hambantota Port to China for 99 years and the future Colombo Port city complex for 90 years. The UNP government was able to nominally arrest the rise and growth of China during its term. For India, Sri Lanka is geo-strategically vital for its continental security and maritime interests in the Indian Ocean region.

The Rajapaksas have been out of power for five years. Their victory will return strategic advantage to China. After its rise in Nepal, Beijing will be scoring its second victory in India's neighbourhood. But there are still five months to go.