No one gains from this mutually destructive rhetoric

THE escalating war of words between India and Pakistan will do good to neither side; on the contrary it could cause incalculable harm to people of both countries. 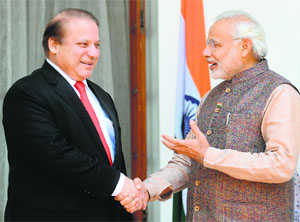 Where has the initial positivity gone? Efforts to play up hostility can only lead to jingoism AFP

THE escalating war of words between India and Pakistan will do good to neither side; on the contrary it could cause incalculable harm to people of both countries. Pakistan was too easily provoked by the disclosures/confessions of the Modi sarkar. Each time New Delhi has recalled an episode from the history of confrontation between the two closest neighbours, the hawks on this side have welcomed the opportunity to revive their confrontational narrative. A better response could have been a dispassionate analysis of the Indian strategy.

Take Mr Manohar Parrikar's statement regarding meeting terrorism with terrorism. The Indian Defence Minister did not disclose anything that was not known to the world. Instead of getting hysterical over what was considered as confirmation of India's incurable perfidy, Pakistan's leaders and the media managers should have dismissed the affair as part of the BJP’s drive to broaden its popular backing by unfurling its ultra-nationalist standard.

New Delhi’s reported decision to celebrate the 1965 war also should have been taken as part of a design to play up its military power and its capacity to defend nationalist ideals. Now Mr Modi has provided grist to the confrontationists' mill in both countries by recalling his country's role in the making of Bangladesh. Again, he has not revealed any secret. The story of India's part in raising the Mukti Bahini and the use of regular troops inside East Bengal much before their open involvement and the 1971 conflict has been told in numerous books. Again, instead of issuing statements that can only whip up anti-India sentiment Pakistan's political and other leaders as well as the media should have pondered the thinking behind the Indian premier's obviously calculated oratory. It is obvious that the Modi government has adopted a revanchist agenda. The populist slogan-mongering is designed to convince the Indian people that their country is a great power and that it has the means to change the geography of the region. A second and a more important plank of this strategy is wooing the neighbours except Pakistan.

The most important part of Mr Modi's mission to Dhaka was not to remind his hosts of the midwife who had helped the birth of her state but to drive home his qualities as a peacemaker as confirmed by agreement on the transfer of over 150 enclaves along the common border. Pakistan and India had haggled over some of these enclaves for years and when agreement had been reached over Beru Bari, Jawaharlal Nehru pleaded his inability to get the accord through Parliament. Without saying this in so many words, Modi wants the world to realise that he has succeeded where Nehru had failed. By mending fences with Bangladesh he has taken another step towards isolating Pakistan in the region. It is this aspect of the matter that should cause anxiety in Islamabad.

Since the Modi regime is using history to meet domestic compulsions, Pakistan must refuse to be provoked and leave this matter to the people of India. They are the guardians of democracy, secularism and peace. One hopes democratic values have sunk deep enough in the psyche of the Indian citizens that they can prevent their state from following the path of European strongmen.

Pakistan must not forget the 1971 events because it has yet to draw the correct lessons from them. First, it is necessary to purge the Pakistani mind of all that has been said and done to justify the violence used to quell what essentially was a political uprising. Secondly, while India did play a critical role in the 1971 conflict, Pakistan lost as a result of its isolation in the world and for having lost the moral argument much earlier than Indian intervention.

The foremost lesson is that Pakistan must not allow itself to be isolated. Pakistan's image as a hotbed of terrorism is being exploited by a large number of countries to turn it into a pariah state. Pakistan has to protect its standing in regional and world councils through positive diplomacy and by putting its own house in order.

In order to promote a constructive policy towards the South Asian neighbours, especially India, Pakistan will have to stop blaming the Indian spy agency for all its political and law and order problems. In the favourite narrative from the killing of Ismailis in Karachi to the unrest in Balochistan — everything is laid at RAW's doorstep and nobody is worried about loss of face when the perpetrators of a ghastly crime are arrested and are found to be Pakistanis.

That RAW is active in Pakistan need not be denied. Considering the kind of games secret services in India and Pakistan play against one another, the accusations New Delhi and Islamabad hurl at each other cannot be ignored. However, a simplistic denunciation of a foreign agency for all of the country's ills leads to extremely dangerous consequences. You start believing, contrary to evidence, that a Muslim cannot kill a Muslim inside a mosque or imambargah. You start believing that foreign agents alone are responsible for all the problems in Balochistan. As a result, little attempt is made to trace the roots of dissent and disorder in Balochistan or the forces of religious extremism.

All efforts at playing up India's hostility towards Pakistan unavoidably lead to jingoism, rule out any peaceful solution of mutual issues and reduce the elected government's options to settle matters. By continuously harping on the RAW factor, Pakistani leaders are not only falling into the trap of a tit-for-tat policy, they are also making the country's domestic troubles more and more intractable. What Pakistan needs is to evolve an India policy that is rational, positive and in the best interest of the people.

By arrangement with the Dawn