North Korea’s reputation as a roguish and dangerously belligerent regime is a self-earned and -established narrative, though the entirety of the truth on the genesis and the evolution of the crisis in the Korean peninsula is based on incomplete truths that belie the complete facts of history and the accompanying role of the US, over the years. 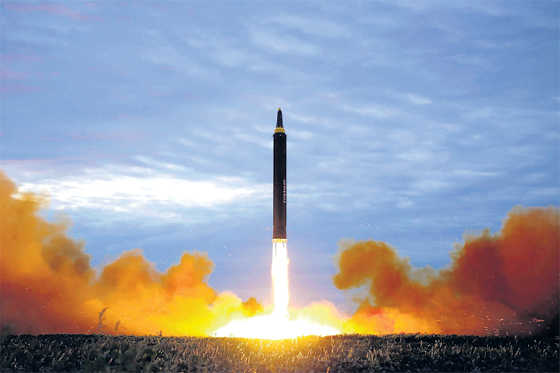 North Korea’s reputation as a roguish and dangerously belligerent regime is a self-earned and -established narrative, though the entirety of the truth on the genesis and the evolution of the crisis in the Korean peninsula is based on incomplete truths that belie the complete facts of history and the accompanying role of the US, over the years. Like the infamous spin-doctoring of the presence of 'Weapons of Mass Destruction' (WMDs) in Iraq, which ostensibly legitimised the US invasion of Iraq - which later spun into aunbridled mayhem by the convenient US withdrawal, is playing out a narrative today in the battlefields, from Syria and Libya to Yemen. Earlier, the same incomplete and convenient US intervention in Afghanistan had left a devastated and destroyed country to the mercy and bloodlust of the erstwhile US-supported mujahidin. That Saddam Hussein or Afghan warlords were once feted and armed by the US is a glossed-over patina that is systematically swept under the carpet as it allows the plausible option for the US to retain the moral high ground.

North Korea's penchant for nuclear-tipped theatrics is now equally matched by US President Donald Trump's reciprocal drama and proclivity for the 'fantastic' - from dropping the GBU-43 MOAB (aka mother of all bombs) in war-torn Afghanistan to raining 59 Tomahawk cruise missiles on a dilapidated airstrip in Syria, the end result of which in both cases was a military dud. The whimsical unpredictability of leadership in both Pyongyang and Washington DC bodes ill. North Korea's relative isolation from the information highway, with its limited ability or desire to communicate externally, ensures that complete truths on the North Korean saga and the shortcomings of the US history and subsequent policies never mar the global perceptions.

The global thaw in the post-Cold War era had reached the Korean peninsula as well, with the signing of the 1994 Agreed Framework, wherein the then-nascent North Korean nuclear programme did agree to freeze the weapons development in exchange for promised aid in a quid pro quo. What is lesser known is the stuttering and delaying of the promised US aid, as presumably the US Congress in the Clinton era, was Republican-controlled. As part of the deal, Pyongyang did shut shop at its Yongbyon reactor till 2003. The non-fulfilment of the deal by the US made North Korea surreptitiously restart its covert operations of uranium-based n-capability.

George W Bush added to the Kim-regime's fears with the famous triad of 'Axis of Evil', wherein he suggested a regime-change, similar to the one undertaken in Iraq. Sanctions were imposed and a crucial Macau bank with North Korean accounts was frozen.

North Korea retaliated and boycotted the six-party talks with the condition that sanctions be lifted. Multiple signals from Pyongyang for negotiations with the US were cavalierly rebuffed. North Korea responded with a tit-for-tat and conducted its first nuclear test in 2006. Its attempts to blackmail the US with its show of  military strength resulted in missile tests in 2009, 2013, 2016 and 2017. As late as 2015, the Obama government felt it below its dignity to discuss a joint Chinese-North Korean proposal for freezing North Korean weapons in exchange for ending US military manoeuvres in the Korean peninsula.

The ascendancy of Donald Trump has exacerbated the situation. As North Korea exhibits instincts of a dictatorial regime bent on survival, the US efforts are towards further tightening of the sanctions-led noose (UNSC resolution 2375 was passed last week). Suggestions to negotiate with North Korea by offering to consider the request of suspending US military exercises, by Beijing and Moscow, have been described by Nikki Haley as 'insulting'.

Both Pyongyang and Washington DC are saddled with impulsive bullies who feed partial truths to their respective constituents. The US suffers from a shortsighted sense of history, whereas the North Koreans invoke the lesser known facts of US history, footprint and machinations in Korea. As Naom Chomsky succinctly states, "You can say it's the worst regime in history, whatever you like, but they have been following a pretty rational tit-for-tat policy."

North Korea is a child of WW2

North Korea is a vivisected child of WW2 and the immediate aftermath of the Cold War era that neatly divided the world into two camps: the US-led and the Communist bloc. The bloody Korean War (1950-53) resulted in a 'draw' along the 38th parallel, accounting for over 3 million deaths, most of them in modern day North Korea which lost an unprecedented 15% of its population to the incessant US bombings. Memories of 635,000 tons of bombs (mostly on North Korea) and of 32,557 tons of napalm are preserved and kept alive in North Korea today. The West's blithely forgotten horrors of the US carpet-bombing are carefully contexualised and rationalised by the successive Kim-dynasts to excuse decades of privation to its populace, and to retain the paranoia about the imminent US attack. The legendary US General MacArthur had testified against his own nation's policy in the Senate's Committee on Armed Services and Committee on Foreign Relations by stating: "The war in Korea has already almost destroyed that nation of 20,000,000 people. I have never seen such devastation. I have seen, I guess, as much blood and disaster as any living man, and it just curdled my stomach the last time I was there. After I looked at the wreckage and those thousands of women and children and everything, I vomited … If you go on indefinitely, you are perpetuating a slaughter such as I have never heard of in the history of mankind." Like in the Middle East, the savagery, duplicity and selfishness of the West is only remembered by the recipient countries.