ARE not cows human beings too?’ a senior BJP leader once asked. 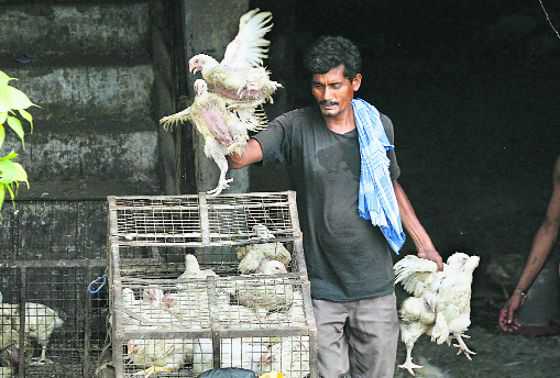 VIOLATION: Caging animals under harsh conditions is illegal, yet we see many battery cages on poultry farms across the country.

ARE not cows human beings too?’ a senior BJP leader once asked. In the past five years, cows certainly got more attention and greater protection than humans. But in the process, we ignored other creatures, including hens. The Union Government, despite repeated orders of the higher judiciary, failed even in framing the rules. The issue of battery cages is coming up for hearing in the Delhi High Court on April 10. Article 51A(g) of the Constitution imposes a fundamental duty on all citizens to have ‘compassion for all living creatures’. “All living beings, including animals, have inherent dignity and a right to live peacefully and right to protect their well-being,” observed the Supreme Court in Animal Welfare Board vs Nagaraja (2014), while banning Jallikattu for a year.

India’s poultry population is 72.92 crore. The broiler meat market in 2018 was estimated at Rs 73,000 crore. The table egg market size is to the tune of Rs 42,000 crore. Unfortunately, hens on Indian poultry farms continue to lead a horrible life. A large number of these birds are stacked in small battery cages, lined in multiple rows piled 3-5 tiers high. The cages are so small that the hens are unable even to spread their wings without touching the sides of the cage or other hens. The floor space available to each hen is less than the area of a single sheet of A4-sized paper. Battery cages prevent nearly all forms of natural behaviour, including perching, roosting, scratching, foraging and exploring. This method of stocking the hens leads to sore feet, minor and major abrasions, broken bones and other bodily injuries to the birds. It also increases the risk of diseases in the flock. The use of such cages is a blatant violation of Section 11(1)(e) of the Prevention of Cruelty to Animals (PCA) Act, 1960, which lays down that any person who keeps or confines any animal in any cage or other receptacle which does not measure sufficiently in height, length and breadth to permit the animal a reasonable opportunity for movement will be considered to be treating animals cruelly, which is punishable under the Act.

If caging animals under harsh conditions is illegal, how do we see so many battery cages on poultry farms? The simple answer is the indifferent attitude of the regulator — the Ministry of Environment, Forest & Climate Change (MoEF&CC) — which has not complied with the orders of the Delhi High Court to enact rules specifying details for enabling implementation of Section 11(1)(e) of the Act.

The poultry industry in India has evolved from backyard poultry farming in the 1950s and 1960s, high platform cages in 1995 to high capacity farms with low compartmentalisation, automated feeding techniques and environmentally controlled housing by 2011. The new system was inherently cruel, which motivated the Animal Welfare Board of India (a statutory body established under the PCA Act to prevent cruelty, suffering and pain to all creatures) to discuss the matter in its 38th Annual General Meeting (held in 2012), where a resolution was passed recommending Draft Prevention of Cruelty to Animals (Egg Laying Hens) Rules, to the Government of India for isuing a notification. Subsequently, the board wrote to the principal secretaries of animal husbandry of all states, advising a gradual phasing out of all battery cages in the next five years (till 2017). The government issued a directive to the Chief Secretaries of all states and union territories, directing for implementation of the Board advisory and phaseout of battery cages. The advice was swept under the carpet by the state governments.

Four writ petitions in the High Courts of Punjab and Haryana, Bombay, Allahabad and Hyderabad sought the implementation of the directives and notification of the Draft Rules recommended by the Board. Subsequently, a transfer petition was filed by the Board in 2016, seeking transfer of these four petitions to the Supreme Court or any one High Court for a uniform hearing. The apex court transferred the matters to the High Court of Delhi and directed the Union of India to expedite the process of framing the rules and report the progress to the High Court. The higher judiciary (Supreme Court in 2016 and Delhi High Court in 2017, 2018 and 2019) has expressed its disappointment at the endless delay in enactment of the rules. The government sought six months to finalise the rules, a demand which was rejected by the Delhi High Court in September 2018.

Pursuant to the order of the Delhi High Court, the MoEF&CC convened a meeting, which ended with a request to all parties to submit scientific studies to the ministry. In October 2018, an affidavit was filed on behalf of the MoEF&CC, the Department of Animal Husbandry Dairying & Fisheries and the Ministry of Agriculture, wherein it was stated that at the October 5 meeting, there was ‘no consensus’ among stakeholders on the issue, and further that the Ministry of Agriculture was of the view that birds had a good physical and mental state in the existing cages. The court rejected the statement made in the affidavit. The familiar story of the government not having the will to act against the corporates is being repeated.

The extent of regulatory capture by the industry might result in the government allowing battery cages with a negligible increase in the space allowance — which will be unenforceable and undesirable. There are alternatives (barn system, aviary system and free range system) which are not only animal-friendly but also economically feasible and profitable. Notably, Hyderabad-based NALSAR (National Academy of Legal Studies and Research) University of Law has set up the Animal Law Centre, with Vivek Mukherjee as its coordinator, that undertakes research on issues concerning animal law.