A fortnight is too short a period to judge the performance of a Chief Justice of India. 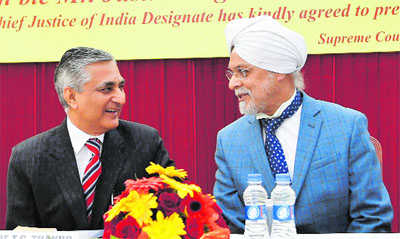 A fortnight is too short a period to judge the performance of a Chief Justice of India. But if the decisions of Justice JS Khehar in the first two weeks after taking over as the 44th CJI are anything to go by, there appears to be a clear shift from judicial activism to judicial restraint.

Let us have a look at the orders Justice Khehar’s Bench has passed.

These orders are in sharp contrast to those passed by Justice Khehar’s predecessor Justice TS Thakur, during whose tenure the government had constantly been at the receiving end of judicial activism. Many considered such actions to be judicial overreach that undermined the fine balance between the legislature, the executive and the judiciary envisaged under the Constitution.

Be it the issue of judicial vacancies in high courts or the stalemate over memorandum or procedure for judges’ appointment or inordinate delay in the appointment of Lokpal — the anti-corruption ombudsman — Justice Thakur was harsh on the government, to say the least. He scoffed off the government’s attempts to insert extraneous grounds such as ‘national security’ and ‘public interest’ in the Memorandum of Procedure. Justice Thakur pulled up the government on the issue of pollution and forced the Board for the Control of Cricket in India (BCCI) to implement the Lodha panel reforms.

Justice Thakur went to the extent of criticising Prime Minister Narendra Modi for not mentioning the issue of judicial vacancies in his Independence Day speech from the ramparts of the Red Fort. The relations between the government and the judiciary have apparently deteriorated since then and it got particularly reflected in the stalemate over judicial appointments.

Former CJI YK Sabharwal said in January 2007: “Judiciary need not have a cosy relationship with the government, as it may come in the way of taking independent and difficult decisions.”

Justice Khehar, who is due to retire on August 27, inherited poor government-judiciary relationship, huge vacancies in high courts and burgeoning backlog.

It may be too early to conclude that Justice Khehar is soft on the government. It was he who headed the Constitution Bench that declared unconstitutional the National Judicial Appointments Commission (NJAC) in October 2015. Again, it was another Constitution Bench headed by him which quashed the notification imposing President’s rule in Arunachal Pradesh and restored status quo ante, much to the embarrassment of the Modi government.

Indian judiciary has been widely appreciated for enlarging the scope and ambit of fundamental rights since the 1980s. But not all public interest petitions entertained by courts are confined to enforcement of human rights. Successive governments have joined issue with the judiciary over what they considered unwarranted judicial interference in policy matters.

Former Prime Minister Manmohan Singh once said the power of judicial review should not be used to undermine and erode the role of the government. His successor Narendra Modi may not have said so in as many words but it’s hard to miss the unease in the political class, particularly the government, over judicial activism that often borders on overreach.

Finance Minister Arun Jaitley had criticised the NJAC verdict, saying, “The Indian democracy cannot be a tyranny of the unelected, and if the elected are undermined, democracy itself would be in danger.”

A Parliamentary Standing Committee report on law and justice has once again highlighted the dangers of judicial overreach. The committee headed by senior Congress leader Anand Sharma has demanded that the government be given back its legitimate say in judicial appointments, saying it was a “shared responsibility of the executive and the judiciary”.

“As long as PILs are confined to the enforcement of human rights, the judiciary is on the right side of judicial activism. The wrong side becomes evident when judicial activism is not grounded on textual commitment to the Constitution,” said senior Congress leader Chidambaram in 2011 at the Dr Kailash Nath Katju Memorial Lecture on “What Ails the Indian Judiciary”.

Indian judiciary has often been described as an overambitious institution. Perhaps now there is a realisation that there could not be a judicial solution to every problem. It appears Justice Khehar perhaps felt the need to re-set the judicial compass to dispel the misgivings about judicial activism and overreach.