Reaching out in a big way

THERE is no doubt that Prime Minister Modi’s speech on June 8, when he addressed the US Congress, was brilliant. 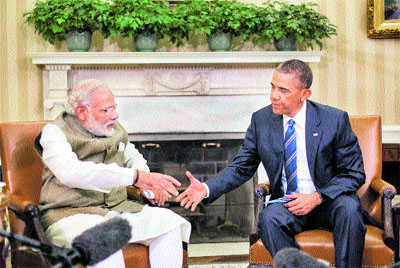 warming up: For now, it is all too rosy between India and the US.

THERE is no doubt that Prime Minister Modi’s speech on June 8, when he addressed  the US Congress, was brilliant. The contents resonated with the audience; there was a bit of humour and all issues were covered. The first three Modi visits were the buildup to this hard-core business visit. The joint statement at the end of the visit sets out the path ahead in considerable detail.

The expression that relations in the past were marked by “hesitations of history” was particularly evocative and summed up India-US relations in the past and points to a new future. Yesterday’s “natural allies” are now referred to as “indispensable partners”, making it obvious that if India has to realise many of its dreams for its people, the US will have to play a major role in this. But surely not the only one.

Hopefully, in India we will accept that we are dealing with a preachy democracy and a sanctimonious media in America. Just as much as one hopes that Americans have understood that they are dealing with an evolving, sometimes chaotic and hesitant, but aspirational democracy that is just breaking free from being a dynastic democracy. We were preachy at one time too, when Jawaharlal Nehru admonished the West for making Indians fight and die for their imperial wars. Modi turned this around by saying Indians too had fought and died for democracy. Thunderous applause.

The script of India-US relations, since May 2014, has run like the first half of a mid-60s Bollywood movie. All fun and games with cosy moments and promises before the interval. The future looks bright, and together, the two can conquer the world. All this, while the bad guys China, Pakistan and North Korea sulk in their dark corners. The hard part is about to begin after the intermission, so fasten your seat belts and hope for a happy ending.

There are plenty of positive takeaways from the visit for both countries, some grey areas still remain and some issues were swept under the carpet. The proof of this partnership lies in the future. Six AP 1000 Westinghouse reactors will be built in Andhra Pradesh once the contracts are signed. The question here is that the US has not constructed any reactors for decades and these might be with untested technology. We have merely agreed so far on the draft text of LEMOA; obviously, there are some reservations. As and when this, and the other basic agreements are signed, it will mean a marked shift in how India views its defence relationship with the US. The joint statement refers, in laudatory terms, to the 2015 US-India Joint Strategic Vision for the Asia-Pacific and the Indian Ocean Region. This is expected to serve as a guide for collaboration in the years to come, and the two countries should look to each other as priority partners in these regions. There will be collaboration in maritime security. The defence relationship could be an anchor of stability and the US recognised India as a ‘major defence partner’. That is different from being an ally.

The US “will continue to work toward facilitating technology sharing with India to a level commensurate with that of its closest allies and partners”. This would also entail US support to the Make in India initiative. Strong words, indeed, but they are for the future; nevertheless, there is great stress on defence cooperation and diplomacy. In addition, the US “is committed to bring to bear its technical capacity, resources and private sector…to spur greater effort in India’s renewable energy”.

These formulations bring the relationship a long way away from the Cold War era, when we were dubbed a satellite of the Soviet Union. However, now that the USSR has gone, we should not repeat the mistake in reverse of cosying up to the US and moving away from the Russians, acting on the rebound, as it were. The point is that we cannot and should not. The US-Russia relations were always destined to be inimical; Communism was an excuse and the real reason was that each sought global domination. And Russia has not quite collapsed the way Western powers hoped it would. Under Vladimir Putin, it has bounced back and India should not get carried away by the demonisation of the Russians and their leaders that we see in the West. We have to make our own judgments and evaluations.

The India-US ties are not only about bilateral relations. There are geopolitical considerations for both that could affect the bilateral equation. The other consideration is that having raised the India-US bar so high, other nations watching these developments, will have already begun to take counter-measures.

America’s relations with China are also strained, at present. Russia, too, will reevaluate its relations with India following the Modi visit and we must remain wary of a Russia-China arrangement, with Pakistan thrown in for added measure. The US ties with neither Pakistan nor Afghanistan are particularly healthy; nor with Iran. This means that the US footprint in our neighbourhood is presently weak and India is the only responsible power in the region that it can deal with. There should be a value-added for us in this situation.

The US has not taken too kindly to the BRICS initiative and all the other initiatives that have followed with China playing the lead role. An alternative development bank is one of these, and BRICS is seen as the embryo of another grouping to oppose the Western G-7. Brazil stands weakened in the group and the US opposition to both Russia and China is no secret.

It is doubtful that the US will, or can,  influence Pakistan on terrorism and nuclear issues. The American warning, soon after the Pakistan-appointed Taliban leader Mullah Mansour was killed in a drone attack, related only to terrorism in Afghanistan. It is unlikely that the US would give priority in tackling terrorism on the ground if it does not affect its interests directly.

Pakistan military leaders have obviously not read or followed what Sun Tzu said about the art of war — “You can fight a war for a long time or you can make your nation strong. You cannot do both.” Pakistan chose to be in a state of perpetual war with its neighbours and China helped it along with the delusion that it was becoming strong with its missiles and nuclear weapons. And today, the results are showing but no change in policy either in Pakistan or China can be reasonably expected.

Regardless of these geopolitical realities, it was a successful visit but our celebrations should be tempered with keeping our expectations reasonable.

The writer is a former head of RAW