The global churn : The Tribune India

IN the past week, the world witnessed two strange spectacles: the leaders of India and China defended globalisation and free trade that the developing countries for decades saw as a neo-colonial instrument for exploitation; and US President-elect Donald Trump had a spat with the US intelligence fraternity over a report that Russia held damaging evidence of his frolicking. 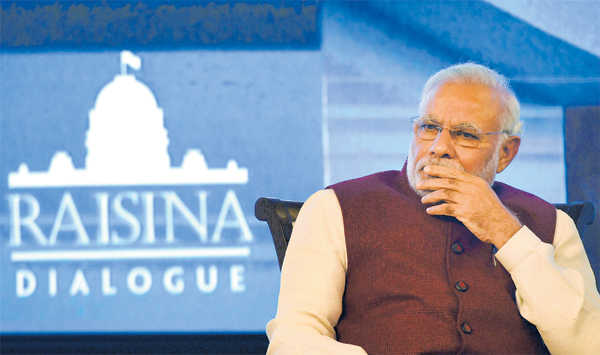 Change of mind: Modi is for globalisation and against ‘walls within nations’.

IN the past week, the world witnessed two strange spectacles: the leaders of India and China defended globalisation and free trade that the developing countries for decades saw as a neo-colonial instrument for exploitation; and US President-elect Donald Trump had a spat with the US intelligence fraternity over a report that Russia held damaging evidence of his frolicking. Both issues have implications that go beyond the moment or even the countries involved.

Chinese President Xi Jinping, addressing the World Economic Forum at Davos on January 17, likened protectionism to “locking oneself in a dark room”. PM Modi, a day later, at the Raisina Dialogue hosted by India, peculiarly on dates clashing with the Davos Summit, warned against walls within nations and a sentiment against trade and migration. Despite the IMF lowering India’s GDP growth rate by 1 per cent — putting it behind China — they are amongst the few drivers of global growth.

This is ironical as the perils of globalisation were berated for decades by the non-aligned and developing countries, leading to the birth, in 1964, of the United Nations Conference on Trade and Development (UNCTAD), a principal organ of the UN General Assembly. Its aim was to “maximise the trade, investment and development opportunities for developing countries”. For a more level playing field, a system of concessional tariffs was conceded by the developed countries. That logic has been upended by the manufacturing might of China and the booming pharmaceutical and software industries in India. Thus the developed world, particularly the US, has created new non-tariff barriers, like visa limits on software workers implementing programmes for US clients or health and environmental standards, or even labour standards (alleging India used child labour in hand-knotted carpet industry), while protecting their own labour and agriculture markets.

Trump defied logic and precedent by using social and electronic media to take positions when he should have awaited inauguration, shaped his cabinet and let nominees get Senate confirmation. Unsurprisingly, one poll indicates that unlike past Presidents-elect, behind whom the nation rallies post election, his approval rating has slipped below 50 per cent. He encouraged the British PM to exit the EU and criticised German Chancellor Angela Merkel for admitting refugees as national elections loom, ignoring her criticality to European stability. He compounded it by calling the EU “basically a vehicle for Germany” and that other countries would follow Britain in leaving it. Merkel coolly responded that this was old hat and “we Europeans have control of our destiny”. In an interview with The Wall Street Journal he again riled the Chinese by rejecting ‘One-China’ policy.

Continuing with this charade, Trump repeatedly criticised NATO, calling it “obsolete”, and then, instantaneously added “NATO is very important to me”. This is great theatre, but is leaving all wondering if there is a method to this madness. Is Trump sensing that the tectonic plates of the global order are shifting and the US needs to exploit that by reordering the US created post-World War II order? The aim seems to be to mitigate the negative impact of globalisation on Western economies as the benefits have gone inordinately to the richest, destroying traditional manufacturing jobs and spreading doom and gloom. Trump will discover, once he assumes office, that reality is complex. For instance, he can disrupt NAFTA and trade with Mexico, but while the US trade with Mexico may be just 3 per cent of the US’ GDP, some 5 million jobs depend on it.

Though the principal targets of Trump may be China, Mexico, etc. India would err thinking its software exports will be exempted from this onslaught. Trump wants to re-shore US jobs, ignoring that many jobs may be eliminated by technology and competitiveness. A new Trumpian global order may attempt to ensure US hegemony abroad, and jobs at home. We are in times of rising international tensions and re-jigged trade and investment regimes. New technologies, like Adidas introducing US- based robotic and 3D-print technology for shoe production with new materials and speedier design changes, will capture new markets and create smarter jobs. Trump may be the agent for constructive destruction, but all countries strong in research and development can seize the initiative. Thus Chinese have been buying European companies that have critical technologies.

That brings us to Trump and the intelligence community. US Presidents get a President’s Daily Brief (PDB) prepared by intelligence advisers. It used to be the CIA head in the past, but post 9/11, the Director National Intelligence leads. President Richard Nixon was the last one to omit receiving that because of his distrust of the CIA, which Trump shares. Unfortunately, Trump does not have Nixon’s experience of international affairs. Unlike India, there is congressional oversight of intelligence in the US.

The misuse of intelligence machinery in India, both by the Union and state governments for monitoring political opponents, is shockingly large and taken as “perks” of office. Were the AAP to capture power in Punjab, with its angst over the misuse of the Delhi Police by the Union Government, it would need to choose. The Punjab state government facilities in Delhi, like those of other state governments, are traditionally used for counter-intelligence on allies, party-men and the Union Government. Will the AAP succumb to the temptation or draw up new guidelines for its role?

Leaders of most major powers today are products of populism and nationalism with competing visions of the future. Xi wants open trade but hegemonistic control over own population and the region abutting China. Putin, a czar-like figure, wishes to restore past Russian greatness via military power and crony capitalism. Trump wants to make “America great again”, seeking peace through strength and economic bilateralism to bypass the WTO trading system. Modi seeks an India domestically tax compliant with  the broadened tax base, targeted social security schemes and infrastructure-driven race to more manufacturing jobs. Externally, he seeks a multi-polar world, which allows India more strategic space and time for economic surge. The Sino-Pak alliance wants to prevent that while China enlarges its strategic maritime footprint and entrenches the OBOR. Trump is the joker in the pack, capable of turning the game into a no-trumps bridge grand slam or overbids, and falls short.