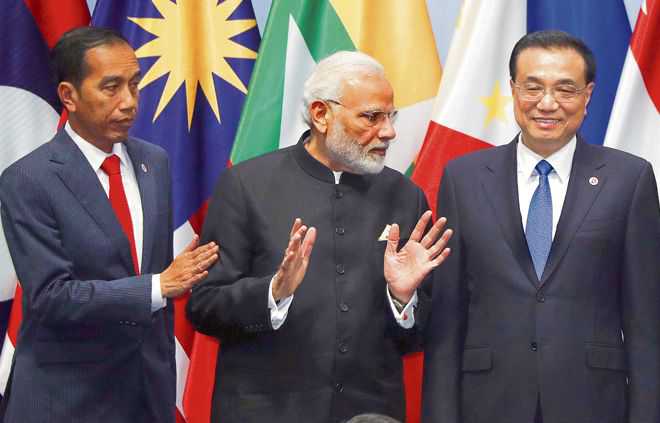 Govt’s duty: The fundamental of the RCEP for India is self-interest.

An idea, commensurate with the ‘global village’ slogan, was born. It is the world’s biggest economic bloc, covering almost 50 per cent of the world demography (1.4 billion Chinese and 1.3 billion Indian). However, how, and which way does India benefit by joining this ‘club-16’? ‘Free trade area’ is an attractive slogan of/for ‘globalisation’ protagonists, in which free flow of capital, goods and labour constitute the core. But, the beneficiaries here usually are the minority ‘big boys of the game’, with non-beneficiaries constituting the majority. Regretfully, India thus far has not been a beneficiary therefrom.

What’s worrisome for India at this point in time is the economic growth rate owing to the overall core sector slump and adverse bilateral trade balance with RCEP countries. The latest bilateral trade figures are too dismal to be ignored, and grave enough not to be noted, for course correction.

Overall, therefore, the Indian position in RCEP appears non-promising. The 2018-19 trade deficit stands at a staggering $107.269 billion with 11 countries and a paltry $2.038 billion surplus from the four small countries of Cambodia, Lao, Myanmar and the Philippines, thereby making India a net loser of $105.231 billion.

In this scenario, what does India do now? Should India join the RCEP club-16? At a time of acute trade imbalance? Facing the industrially advanced and financially robust China, Japan, South Korea and the likes of Australia, Brunei, Indonesia, Malaysia, New Zealand, Singapore and Thailand with consistent high deficit? Will India be able to deal with, and reverse, the rising trade deficit in the multi-lateral trade mart when the bilateral itself is going haywire?

Hence, India must play her game to tell all RCEP, preferably bilaterally: “Look, you guys are eyeing our market for your finished goods. Fine. You have the advantage of industrial goods which we somehow cannot compete with, at this point in time. So, if you want access to our vast market and hinterland thereof, first give us access to our goods, services, labour and capital and guarantee us as to what description, quantity, value and types of goods you wish to buy from us. Before going multi-lateral, let us be clear about the terms and conditions of the existing, or future, bilateral.” Here, an important thing needs to be borne in mind, without fuss. The RCEP has the indelible stamp of Chinese OBOR/BRI writ large all over. It’s the Australasian oceanic version of the land-centric 60-plus countries, spanning from Dairen (now Dalian) to Duisburg; Gwangzhou to Gwadar; Manchuria to Monaco. All going through land, to reduce the disruption possibility of Chinese sea-borne trade, and simultaneously enhance the seamless movement and mobilisation capability of Chinese civil and military assets through rail and road, across the 10,000-km Euro-Asian heartland.

The fundamental of the RCEP for India, therefore, has to be ‘national self-interest’. Absolutely. It’s the bounden duty and responsibility of the state to look after the interest of the 1.3 billion people and the industry, commerce and agriculture of India. Globalisation or no globalisation. The people of India must be looked after by the representatives of the people of India. It cannot be done by any foreigner. If our industry suffers and companies go bust for lack of resources, and our food self-sufficiency collapses because of point-of-no-return agrarian distress, it’s absolutely no point to open our market to foreigners, like what the Mughals did under Jahangir in 1612. One foreigner substituted by another; and Indians suffering under foreign rule. That’s unacceptable in toto. No foreign country will come to the Indian market to help India. The Powerful India of 1.3 billion head is bound to be perceived as potential ‘threat to their existence’.

Hence, every foreign country axiomatically has to look after its own interest and the people thereof. They want the Indian market only. That’s the bottomline of the global agriculture, trade, business, commerce and industry. Globalisation is a trap of the rich to exploit the non-rich and the soft.