The 31st of March has great significance for any manufacturing company. 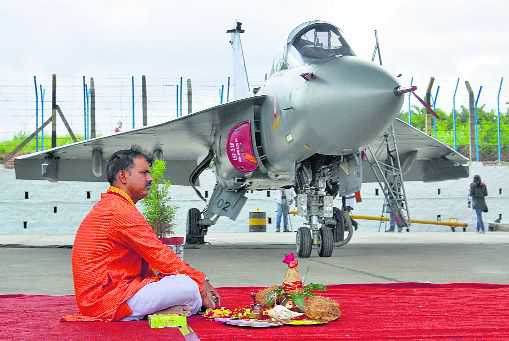 BEFORE TIME: The yearly output efficiency benchmark of every DPSU needs to be changed from production to acceptance by the Services.

The 31st of March has great significance for any manufacturing company. If a civil commercial company meets its sales target by this last day of the financial year, it is a feather in the cap of its head, who gets a good evaluation from his boss. This pressure of meeting the deadline percolates down, as he evaluates the second tier of officers who, in turn, do this for the next level, and so on. If it is a question of a company making soaps and shampoos or any commercial product, a sales shortfall affects its revenues — and people lose their jobs. This is true of the private industry, but unheard of in the public sector — certainly not in defence public sector undertakings (DPSUs), because here it is the production target that is set! And, there

is a big difference between sales and production.

Let us take Hindustan Aeronautics Limited (HAL) — the only aviation company of India in which the IAF has great stakes. On March 25 this year, a tweet from HAL announced that ‘HAL has produced 16th LCA of IOC Contract as per the target till March 31, 2019. The customer flights are expected soon (emphasis added).’ The tweet was marked to people in the Ministry of Defence (MoD), conveying to the bosses that the company’s target had been met.

The Secretary of Defence Production would surely inform the Defence Minister and earn her accolade. As an old fogey, who has dealt with tricks that DPSUs play with the gullible public at large, may I request her to hold back her appreciation till HAL confirms when the 16th aircraft is accepted by the IAF for squadron service?

That event, which corresponds to a sale, should be the yardstick by which the efficiency of every DPSU should be judged. The Defence Minister  should also ask for comparative figures of overtime paid to employees per quarter. Why? Please read on.

Media reports have highlighted how the IAF has repeatedly pointed out to the MoD the below-par work of HAL many a time in servicing of aircraft to meet production targets. Ask any IAF pilot who has gone to HAL to accept an aircraft rolled out by it, and the litany of unserviceabilities and snags necessitating repeated air tests before final acceptance will flow; and this is true not only for overhauled aircraft, but also brand-new ones. The delay in acceptance sometimes extends eight to nine months, necessitating many more flights (sometimes 10 plus) than only two or three, which should suffice if the workmanship is as per standards.

There are three reasons for this. First, a lack of accountability in the first three quarters to meet quarterly production figures. No one is punished for the delay. Second, the resultant increased workload in the last quarter, especially as March 31 approaches, coupled with flexible work ethics results in overtime work — and payment of course!

So, substandard work ensues, else why the repeated and enhanced number of acceptance flights? And last, but more importantly, a degradation in ethics and morals to claim kudos for a job not well done and not on time; when such scruples are scuppered in an aviation company, we are asking for trouble. An example should explain this.

As the Assistant Chief of Air Staff looking after helicopters, I was to accept the first three Cheetal helicopters on behalf of the IAF — it was the month of March 2009! On reaching Barrackpore a day prior to the handing over, I saw tents, streamers, banners et al, all set for a festive official handing-over ceremony to the IAF, with the media invited for sure. A casual question on how the three helicopters were performing drew an answer that none were serviceable, and ‘Sir, after your acceptance they would be rectified.’

This was blasphemous to a service officer’s ethics and on my threat to take the next day’s morning flight back to Delhi, HAL worked late hours to bring one aircraft on line. Remember, all was set for a publicity blitz, and the management would have had to face the flak. So, one aircraft was taken over amidst much clapping and photographs; the second one took a few more months and the first ferry to Leh happened in August, a delay of five months! Par for the course, one can say, and would continue to be so if the MoD does not demand and check honesty in work ethics.

So, in the case of the Tejas claim (of the production target of 16 aircraft having been met), the Raksha Mantri may please reserve her kudos, as also change the yearly output efficiency benchmark of every DPSU from production to acceptance by the Services. Else, it would be overtime, as usual, every 31st March.