With the ISIS declaring an Islamic Caliphate, the alarming prospect of the use of WMDs (Weapons of Mass Destruction), including chemical weapons falling into jihadi hands, could become a reality. 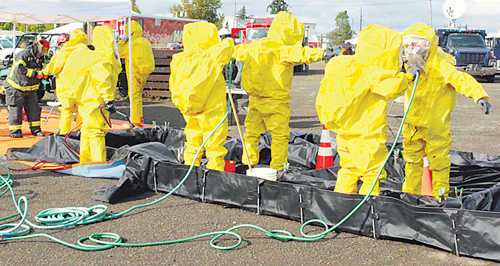 With the ISIS declaring an Islamic Caliphate, the alarming prospect of the use of WMDs (Weapons of Mass Destruction), including chemical weapons falling into jihadi hands, could become a reality. The issue re-emerged recently with ongoing media reports about the alleged use of toxic chemicals in several barrel bomb attacks in Idlib governate between March 16 and 31, 2015.  These raised troubling questions.  The scenario becomes more complex because Idlib has fallen to rebel forces. On March 18 Islamist group Jabhat al-Nusra and other armed opposition groups opened a major offensive against government forces in Idlib that culminated in its capture on March 28.

According to media reports, witnesses filmed remnants of barrel bombs.  Among the remnants were containers typically used for refrigerants in refrigerators and air-conditioners. Videos and photos from the aftermath of five attacks, including material shared by the Syrian Civil Defence, show containers of a size, shape, and design commonly used for refrigerants. These canisters are easy to refill with other gases and widely available in Syria.

Three doctors who treated those exposed in two of the attacks reported that symptoms included troubled breathing, burning eyes, burning sensation in the throat, and coughing. In most serious cases the doctors described patients suffering from pulmonary edema, or fluid in the lungs. It was not possible to conclusively determine what toxic chemicals were used. The chlorine smell reported by rescue workers and doctors, a local journalist's report of a yellow gas leaking from a refrigerant canister after an attack on Idlib city, and the previous use of chlorine in the Syrian conflict suggests this chemical may have been used.

Despite an effective disarmament instrument in the Chemical Weapon Convention (CWC), which contains an absolute prohibition on the use of chemical weapons, the regime has been challenged in recent years due to the complexity of the Middle East situation and the so-called failed Arab Spring.  When the CWC was negotiated and ratified, the key players in the Middle East, Egypt, Israel and Syria refused to ratify it.  Egypt and Syria argued that both had earlier ratified the NPT [Nuclear Non-Proliferation Treaty] on the understanding provided by the USA and the EU, that Israel would do so. This did not happen. Therefore Egypt and Syria kept out of the CWC.  Egypt and Israel are yet to join the convention.

Syria perforce had to ratify the regime in October 2013 after strong international pressure following allegations of use of chemical weapons in Syria which first emerged near Aleppo in Northern Syria in March 2013.  Following the America-Russia accord on this issue, the OPCW team completed verification of 96% destruction of Syria's chemical weapons stockpiles within the deadline of  September 30, 2015. The total amount was 1300 metric tonnes.  The UN Special Coordinator, Ms. Sigrid Kaag, informed the Security Council of the destruction of Syria's stockpiles on board US maritime vessel, Cape Ray.  This was a complicated operation. Due to Syrian sensibilities about the direct transfer to an American vessel, the chemicals were first transferred to a Danish ship, Ark Futura, in the Mediterranean, off the coast of Italy.  Cape Ray had field deployable hydrolysis systems.  The chemicals were neutralised in international waters.

On March 6, the UN Security Council adopted Resolution 2209 in which it expressed concern that toxic chemicals had been used as a weapon in Syria and decided that in the event of non-compliance, it would impose measures under Chapter VII of the UN Charter. The Security Council is reportedly reflecting on measures to stop the use of toxic chemicals as a method of warfare through the UN Chemical Weapons watchdog (the OPCW i.e. the Organisation for the Prevention of Chemical Weapons) which was awarded the Nobel Peace Prize in 2013.  On March 25, 2015, the OPCW's Turkish Director General Ambassador Ahmed Uzumcu  stated that the OPCW was monitoring "the recent reports suggesting that toxic chemicals may have been used as weapons in the Idlib province" of Syria. The OPCW conducted a fact-finding mission in Syria on the use of toxic chemicals during the attacks last month.  Such reports are the key to guiding the Security Council on how to address the issue.  The US, along with Britain and France, has accused President Bashar al-Assad's regime of using chlorine gas against civilians, but Russia maintains there is no firm evidence that Damascus is responsible.  Russia is expected to use its veto in case of any attempt by the EU to impose any sanctions.  In any event, President Obama is reportedly very reluctant to get directly involved in the Syrian conflict.

Unanswered ambiguities remain troubling and need to be examined.  The Syrian regime has consistently stated that rebels had used chemical weapons on civilians in Aleppo and elsewhere.  They have denied the use of chemical weapons in Idlib. In any case, Syria's stockpiles have now been destroyed under the OPCW/UN supervision.  The UN Security Council has been informed of this destruction.  If there are no more Syrian stockpiles, the issue is: Are there other stockpiles?  Who is supplying these chemical weapons to the rebel forces in Syria?  Can these weapons fall into the hands of the ISIS?  Does the ISIS already have access to such WMDs?  Such questions have reportedly been quietly but persistently raised, including privately in New York.  There is speculation that chemical weapons stockpiles of former President Gaddafi in Libya had fallen into rebel hands during the Libyan crisis and are actually circulating among select jihadi groups, including the ISIS, and could make their way in to crisis spots all over the world.  Even the Libyan regime or what remains of it acknowledges that though they had subsequently declared these stockpiles as "new discoveries" of Gaddafi's undeclared stockpiles, they were never destroyed completely.  The physical verification is not yet complete.   Even if a complete destruction takes place, in the absence of information regarding the original stockpiles, one would never be sure whether some fell into the jihadi hands.  We now have a situation where Libya is unravelling and could become a failed State. Thus, this troubling prospect remains a daunting challenge which one hopes the international community, or we in India, never need to address. Vigilance should, however, be our catch-word in the context of our own troubling neighbourhood.