One of India’s most remarkable diplomatic achievements has been that it has settled its maritime boundaries with all its eastern neighbours. 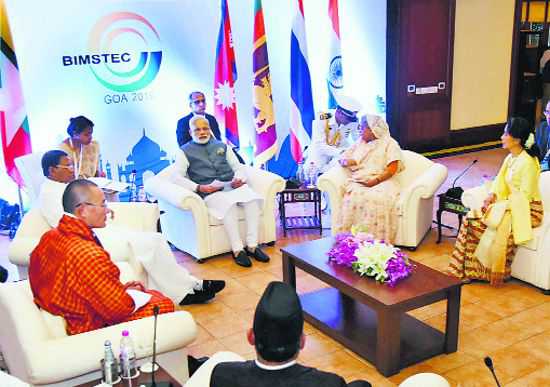 One of India’s most remarkable diplomatic achievements has been that it has settled its maritime boundaries with all its eastern neighbours. This has been achieved, not only through bilateral agreements with Bangladesh, Sri Lanka, Myanmar, Thailand and Indonesia, but also tripartite agreements to determine tri-junctions, with Myanmar and Thailand, Indonesia and Thailand, and across its eastern and western shores with Sri Lanka and the Maldives. Even arriving at a maritime agreement with Pakistan will not be difficult, once the land boundaries are demarcated. In any case, there have rarely been tensions with Pakistan over maritime boundaries.

The readiness to delineate its maritime boundaries in accordance with international law gives India the reputation of being a responsible power. This is in contrast to China, which has maritime disputes with Japan, South Korea, Taiwan, Vietnam, the Philippines, Brunei, Malaysia and Indonesia.  India readily implemented a verdict by an international tribunal, which went against its claims on its maritime boundary with Bangladesh. China has, however, violated the UN Convention on the Law of the Sea by rejecting a similar decision on its boundary with the Philippines. Beijing has also used military intimidation to enforce its claims.

Another important factor has been India’s cooperation with Myanmar and Bangladesh. We have settled our land borders with them and are moving forward in strengthening trade, investment and connectivity cooperation. Both countries have been helpful in dealing with Indian separatist groups, which seek to operate from their soil. Tough action by Sheikh Hasina forced armed separatists and their leaders like Paresh Barua (ULFA) to move out of Bangladesh and seek refuge in Myanmar, where the writ of the Myanmar government is tenuous. Prospects for such cooperation have been augmented, as Bangladesh and Myanmar welcome regional cooperation in BIMSTEC.

A crackdown by the Myanmar army on the Rohingya in Rakhine province has led to over 7 lakh fleeing the country and imposing a huge economic burden on Bangladesh. Their repatriation is becoming harder than expected. Despite negotiations and promises of aid from India, China and Japan, there are not adequate facilities for the refugees to return. Relations between Bangladesh and Myanmar have worsened, with Myanmar alleging that the refugees are being armed in Bangladesh, amid angry denials by Bangladesh.

These developments are occurring when China is blatantly interfering in Myanmar’s internal affairs, while professing to promote contacts between the Myanmar government and insurgent groups operating across the China-Myanmar border. There are 25 insurgent groups in Myanmar, with 15 resorting to armed insurgency. The most powerful of these groups, the United Wa State Army (UWSA) operates from China, across the Shan State in western Myanmar. India’s concerns, however, arise from the fact that the UWSA is now allied to a ‘northern alliance’, comprising armed groups linked to the Kachin Independence Army (KIA). The KIA operates from Kachin, bordering Arunachal Pradesh. It has links with the Rohingya-dominated Arakan Rohingya Solidarity Army at Rakhine, bordering India. Moreover, members of the National Socialist Council of Nagaland (NSCN-K), involved in insurgency in Manipur and Nagaland, also routinely move across the Myanmar-China border.

Growing Chinese influence in Kachin undermines Myanmar’s sovereignty. It also adversely affects India’s security interests.  The United National Liberation Front of Western South East Asia (UNLFW) is a front of Indian separatist groups comprising the United Liberation Front of Assam, NSCN-K, Kamatapur Liberation Organisation and the National Democratic Front of Bodoland. It operates out of Kachin and its members and leaders reside near the border town of Ruili in China’s Yunnan, with the freedom to enter and leave the province. The UNLFW was responsible for the ambush of 18 Indian soldiers in Manipur. The UNLFW also operates out of Myanmar’s Sagaing division bordering Manipur.

As Myanmar faces international pressure on the Rohingya, it is turning to China for support, which is taking advantage by attempting to compel Myanmar to accept it as a mediator for working out a political settlement with the armed groups. It is also demanding Myanmar’s consent to go ahead with the massive, but ecologically damaging Myitsone Dam hydel project, and opposed by the people of Kachin. Given its location, the power produced will be largely consumed in China’s Yunnan. The project has also been controversial because of the environmental impact on its huge flooding area and its location, barely 60 miles from the earthquake-prone Sagaing fault line.

Japan, like India, appears to recognise the dangers of pushing Myanmar to a corner, because it will make it even more dependent on China. The attention of the international community should be on the rehabilitation of refugees, rather than propagandistic posturing on ‘human rights’. India and Japan should work jointly to persuade Aung San Suu Kyi and the military in Myanmar, and Sheikh Hasina in Bangladesh to amicably settle the issue. SAARC is now non-functional, but BIMSTEC looks promising, complementing connectivity and trade with measures for promoting better understanding between members’ security forces. Differences between Myanmar and Bangladesh should not be allowed to worsen, as they will undermine our efforts to promote regional cooperation in our eastern neighbourhood.