Where is the need to politicise water issues?

It is said that water is going to be such a precious resource that the next war would be for the control of potable, clean water. We can survive without oil-consuming travels and industrial luxuries, but not without water that is essential for one and all. 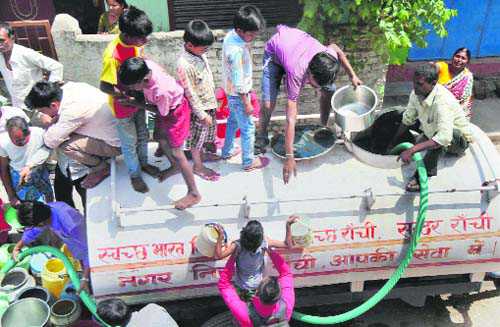 States, irrespective of political leadership, have failed to be the delivering nodes in terms of providing clean water to the citizens. We need to preserve water and sustain it for posterity. PTI

It is said that water is going to be such a precious resource that the next war would be for the control of potable, clean water. We can survive without oil-consuming travels and industrial luxuries, but not without water that is essential for one and all.

Trans-boundary waters between countries and between provinces are already making news headlines. The most obvious players who become the spokespersons for this wealth are politicians. They believe they are the sole legal heirs to this resource, just as engineers think they are the only planners who can handle this complex issue.

Water is a complex system that encompasses related issues such as biodiversity, recharging of aquifers, cultural and religious ethos and the folklore of a particular area. In Punjab, the water-rich areas between two river channels, like Gurdaspur and its chhambs (wetlands), are fast turning into intensive agricultural fields and the dry southern districts are exhibiting water-logging; all this, thanks to the water wisdom of yesteryear. The recent war of words for the Sutlej-Yamuna Link Canal is only the beginning of a concern that we are bound to witness in all its ugliness in times to come.

Is anyone thinking about the water birds, fishes and amphibians? What about the communities that depend upon water systems for their sustenance and the related cultural practices? Unfortunately, few have time for such concerns. These become important only when elections are announced or some policies are to be interpreted in a knee-jerk, reactionary manner.

Not that there are none in terms of good practitioners. But these people are not making any baawlis (step wells to harvest rainwater), or pyaaus (water-dispensing nodes for travellers along highways) in modern times. They are only talking about water in the corridors of power, as if words alone could get us abundance of water. The likes of Balbir Singh Seechewal and Sri Sri Ravi Shankar, who are crusaders for the revival of water channels in the North and South of the country, respectively, are the unsung heroes. Even they could be the victims of the prevalent myopic and “ever-ready-to-fight” temperament of the intelligentsia. The poor water shall then have not enough of itself to shed a tear. References to the SYL, the Yamuna in Delhi and drought-hit Maharashtra give a chance to many to exercise their lungs on national channels, but not many are ready to change themselves. These times are rife with classic cases of failed institutions, insensitive mindsets and the shallow understanding that is not ready to acknowledge the other and thus wishes to be all-exclusive rather than being inclusive in its approach.

People who are at the receiving end are only wondering what they should do to make their lives better. With changing times, for they are surely changing, let us hope that we all change for the good, save this precious resource and support those who understand the larger picture. We must sustain this resource so that posterity does not accuse us of irresponsible conduct. Here all stakeholders, artists, historians, biologists, soil scientists, economists and linguists must come forward and weave a fabric that is as colourful as our heritage.

The writer is a Professor in the Department of Zoology, Guru Nanak Dev University, Amritsar.

He is engaged in research related to rivers and wetlands.