AGRICULTURAL imports and exports are now a larger share of output in India. 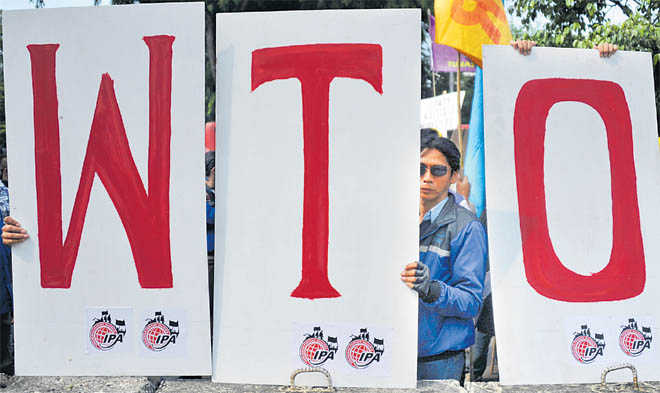 India successfully fought at Doha the onslaught on the livelihood objective.

AGRICULTURAL imports and exports are now a larger share of output in India. In the WTO negotiations India must give priority to the agricultural sector in its state policy, but food security and hunger removal must be set in a policy discussion which is ensconced in what is called the development perspective for trade negotiations. Many experts maintained that the major problem was that the aggregate measure of support (AMS) in India was negative. However, it became difficult to simultaneously argue that India was taxing agriculture and should cut down its protection to agriculture. Interestingly, International Food Policy Research Institute (IFPRI) scholars in a not very well known contribution took a position much closer to stands taken by local scholars like Abhijit Sen, MS Bhatia and myself in 2003-04. In May 2005, in an IFPRI document Mullen, Orden and Gulati said “we report less disprotection of Indian agriculture in the 1990s than in earlier studies”. The IFPRI fell in line with OECD arguments in the trade negotiations that India subsidised its agriculture. These arguments would have been considerably weakened if it was maintained that India taxed its agriculture. The IFPRI stand was then in line with the position that the OECD countries took that India was not taxing agriculture but subsidising it.

There has been little coordination between trade policy and agricultural support policy. Ad hoc policy response has played havoc with incentive systems and agricultural growth potential. A committee report placed in Parliament on the role of the Commission for Agricultural Costs and Prices (CACP) in India to be reformulated in a WTO regime had made the point of integrating price policy with tariff policies.

India had successfully fought at Doha the onslaught on the livelihood objective. Prof Swaminathan, myself and others were happy. But unfortunately for us, in the last round ending recently, the tenacity we held on this subject has been considerably weakened. Trade facilitation discussions are now on but the livelihood objective is now an add-on. Only the future will show that we are still willing to fight for the right of full meals to the poor and the vulnerable.

Meanwhile, events have overtaken these debates. In the recent past ‘Climate Change as a Part of Sustainable Development’ set the stage and the point was made that free trade is helpful in improving efficiency, particularly of energy use, and that helps the poor. So, economic reform becomes a precondition for food security. At Doha and at Copenhagen, India argued for the livelihood and the poverty removal stand which had originated in Indira Gandhi’s ‘Poverty is polluting’ slogan. While preparations for the Climate Change meeting on the outskirts of central Paris in the Le Bourget complex were running in the second half of the last year at a feverish pace, our country was somewhat laid back, apart from an occasional official brief of an oft-repeated stance from many earlier meetings. If economic policy does not have a strategic objective, then the concept of efficiency can be quite misleading,  granting that an unequal world where the poor and the rich are efficient is to be preferred to an unequal world where they are not. But life is not so simple, as a movement on a line or within the Pareto Curve.

We have to argue this through in the next round of global negotiations. On climate change itself, having given up planning, it will be difficult for us to talk about sustainable development in terms of measurable goals. Policy-makers in this country have decisively chosen to disregard the holistic perspective on global negotiations. Having placed ourselves here we may need partial models to pursue India’s interest in the global negotiations. I have argued that the Game Theory models can help us chart out alternatives in this uncertain world. More research and thinking is needed. The abolition of planning is not very helpful in this context.

Should we now take a more proactive stand in these preparations and set them in India? In the US, for example, there were a set of meetings. At one of them, the Center for American Progress and the World Wildlife Fund, amongst others, all close to the establishment, organised the Food Chain Reaction Game in Washington to stimulate consequences which would emerge as food security becomes a compelling requirement in the years and decades to come in the context of climate change. The setting of a ‘game’ to discuss this issue is itself fascinating. The question then is the derivation of policy such that distortions in agricultural trade regimes are removed and incentives for the producers established so that a farmer would then take the maximum advantage of his resource endowments of land, water and soil, access to technology and produce the agricultural commodity which goes into food security in an efficient manner. This must then generate sufficient income, especially for very small peasants, and wages for landless labourers. This would obviously involve collaborative games between countries. The mechanism itself should be of interest in a country where shortages of irrigated land and water are increasingly anticipated. When I was asked to arbitrate the Cauvery dispute, the most important strategy for me was to get the actors from the Garden areas in Karnataka down to the Delta of the Kavery in Tamil Nadu to see how the resolution of the dispute could be around better use of water. That would involve cooperation.

We devised a three-tier system which was earlier tried in the Mekong where countries which had gone to war with each other cooperated in a plan providing the minimum flow of water to the downstream Tonle Sap in the monsoon where the requirements of half a million persons had to be protected. This required changes going up stream all the way. The Asian peasant is the product of a millennium of history and if the policy is honest, he would respond.

If we take a holistic approach and if we introduce medium-term sectoral planning for agriculture and water, we can make a substantial dent on food security problems. I have developed this idea in my book on “The Future of Indian Agriculture”. One of its messages is that if we grow at 4 per cent in agriculture, if diversification takes place and cropping intensity increases, which depends on the relationship between land and water, the poor Indian would eat a fifth more by the end of the decade from the employment that will be generated. If in addition we have successful programmes for sustainable use of land and water, he would eat a third more than at present.

—  The writer is a former Vice-Chancellor of JNU