CHANDIGARH/ BATHINDA:As Punjab goes to the polls on Sunday, an uneasy calm prevails within the Punjab Congress with the simmering tension between CM Capt Amarinder Singh and his minister Navjot Singh Sidhu over alleged ticket denial to the latter&rsquo;s wife reaching the party high command. 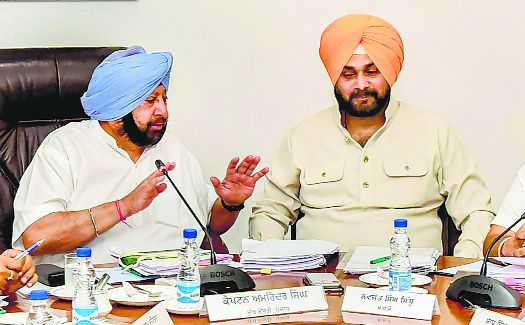 As Punjab goes to the polls on Sunday, an uneasy calm prevails within the Punjab Congress with the simmering tension between CM Capt Amarinder Singh and his minister Navjot Singh Sidhu over alleged ticket denial to the latter’s wife reaching the party high command.

The party’s top leadership is upset over Sidhu’s remarks at a rally in Bathinda on Friday, asking voters to “defeat those playing a friendly match”, eluding to a secret pact between the CM and Akalis, as also referred to by AAP convener Arvind Kejriwal during his recent Punjab tour. Kejriwal alleged that SAD chief Sukhbir Singh Badal and the Chief Minister had struck a deal to ensure that their wives were victorious. While Preneet Kaur is contesting from Patiala, Harsimrat Kaur is SAD’s Bathinda candidate.

Captain’s supporters on Saturday shared a video of the CM’s statement regarding the sacrilege probe (during a rally at Bathinda), apparently to refute Sidhu’s charge that the government had failed to arrest the Badals in the case. There is apprehension within the party that the Lok Sabha results on May 23 may lead to an even bigger storm with more Amarinder baiters joining in.

Sidhu’s rallies in high-stakes Bathinda on Friday stumped many as he chose to attack the CM, not the Badals. Instead of staging a coup in the Akali bastion, he literally  staged a coup in the Congress camp, targeting Capt Amarinder in his 55-minute speech at Badals’ pocket borough Lambi.

He asked as to why no FIR was not lodged against the Badals in the sacrilege case. He also questioned “inaction” on the drugs issue. “Eh kehda friendly match hai ki chitte wale andar nahi ditte? (What sort of friendly match is going on with those indulging in the drug trade not put behind bars?).” His outburst against the CM was not restricted to one rally. He reiterated the charges at public meetings in Bathinda, Mansa and Budhlada.

Anxious party leaders say the controversy may harm the prospects of the Bathinda nominee. “It is a self- goal by the Congress. If the party loses this seat, an ugly blame game could ensue between the two leaders”, says a PPCC vice-president.

Till May 14, when he showed up with Priyanka Gandhi Vadra, Sidhu stayed away from campaigning in Punjab. The simmering tension between him and the CM reached a flash point with his wife alleging she was refused the ticket from Amritsar at the behest of the CM and Asha Kumari. “My wife has courage and moral authority and will never lie,” Sidhu rushed to her defence, even as the CM denied the allegation.

Coming to Sidhu’s support, a senior leader said there was anger in the party and among the public over the government going soft on the Badals on sacrilege and drug cases. “Sidhu is raising the right issue, but at the wrong forum and wrong time,” he said.