BATHINDA:Following the heavy spell of rainfall in the region this week, farm leaders are claiming huge losses to cotton and paddy crops while seeking immediate &lsquo;girdawari&rsquo; followed by adequate relief to the farming community. 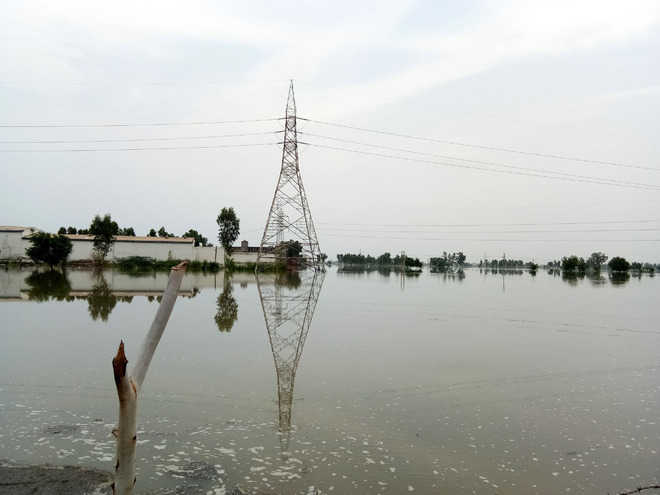 Rain fury: A flooded field along the Muktsar-Kotkapura highway on Friday. Archit Watts

Following the heavy spell of rainfall in the region this week, farm leaders are claiming huge losses to cotton and paddy crops while seeking immediate ‘girdawari’ followed by adequate relief to the farming community.

Talking to The Tribune, Bathinda unit chief of the BKU Ekta Ugrahan Shangara Singh Mann said, “We have received reports of cotton and paddy fields getting submerged from a number of villages, particularly the ones in low-lying areas. Apart from it, canal breach in various parts of the district has also wreaked havoc on these crops.”

For instance, a breach in a drain near Ablu village left fields submerged, causing damage to paddy and cotton crops. Around 12 villages diverted water accumulated on their fields to low-lying areas, causing a flood-like situation in other villages. Fields in Mehma Sarja, Kothe Sandhuwale, Ablu and Dansinghwala remained inundated. Another breach was reported in a tributary of the canal near Teona village that passes through Ghudda and Bajak among other villages. Subsequently, hundreds of acres of agricultural land got inundated. Farmers at Naruana village dug the main road to drain out water from their fields, as it was posing a serious threat to their crop.

Chief Agriculture Officer, Bathinda, GS Sidhu said they had got reports that cotton in 6,500 hectares and paddy in 4,000 hectares of area were submerged in the district, but there was no information of crop damage as yet. “It is just the area where water is stagnant.”

Mansa unit chief of the BKU Ekta Ugrahan Ram Singh Bhainibagha said hundreds of acres of paddy and cotton crop were under water in the district over the last two-three days, virtually spelling a doom for the farmers. He claimed that over 3,000 acres of paddy crop and more than 1,000 acres of cotton crop had been adversely hit by the rainfall in the district. Besides, veggie crops had also been affected, he added. Among the rain-hit villages are Makha Chahla, Khiva Khurd, Gurthari,

However, Chief Agriculture Officer, Mansa, Gurmail Singh Chahal, said 62 acres of crop had been damaged in Jhunir block due to canal breach. Besides, 76 acres of crop loss in Bhikhi and 42 acres in Budhlada had been reported.

Meanwhile, PAU farm economist GS Romana said both cotton and paddy crops could not survive, if rainwater remained stagnant in the field for two to three days. He said it was more damaging for the cotton crop, as it didn’t require much water.

Roofs of 4 more houses give way in Abohar

Abohar: After heavy rainfall for the past two days, roofs of four more houses collapsed here on Thursday night. Bharati in Nai Abadi, Sita Ram in Azeemgarh, Babu Ram near the Alamgarh bypass and Kamal in Idgah Basti informed the administration that roofs of their houses collapsed late Thursday night. Furniture, fixtures and other household items got damaged, but there was no causality. OC