CHANDIGARH: A local court today imposed a fine of Rs 10,000 each on nine persons who were convicted of drunken driving. 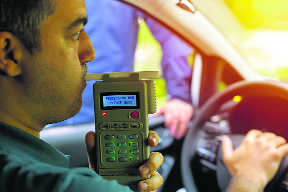 A local court today imposed a fine of Rs 10,000 each on nine persons who were convicted of drunken driving. It is for the first time that a court imposed a penalty of over Rs 2,000 for the offence.

As many as 40 offenders were charged with drunken driving. Nine of them were convicted. They paid the penalty and got their impounded vehicles released.

Abhishek, who was caught driving under the influence of liquor near Sector 47, said, “We never knew about such a heavy penalty for drunken driving. I had only Rs 4,000 with me.”

The Motor Vehicles (Amendment) Bill proposed new penalties for various traffic offences. The Bill proposed a hike in the fine for drunken driving from Rs 2,000 to Rs 10,000.

However, Chandigarh traffic police are yet to notify the amended penalties as an official notification is yet to be received from the Centre.

SSP (Traffic) Shashank Anand said, “Courts and the UT Administration are two independent wings of the state. We are awaiting a notification of the amended laws. As and when the UT receives the notification, we will immediately start following the amended rules. We need stringent punishment for offences so that people are forced to abide by the law.”

Advocate Rajesh Verma said, “The Bill will serve as a deterrent for offenders, curb traffic violations and help maintain road safety. Now, parents have to pay more fine and even face arrest for the violations by their children.”