Defence partnership with India strong, will make it stronger: US

WASHINGTON: America’s defence partnership with India is strong and is looking to make it ever stronger, the Pentagon said, warning nations against purchasing military hardware from other countries. 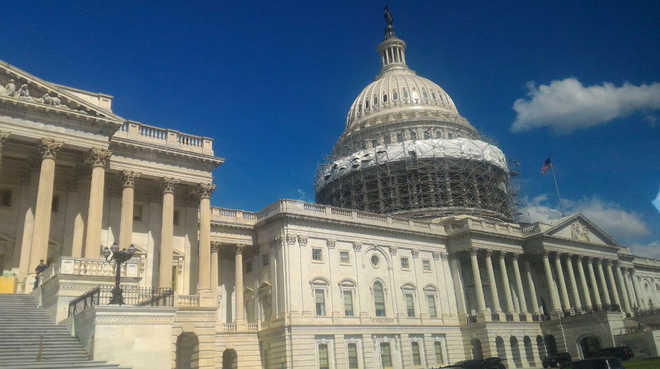 The comments come a day after President Donald Trump has announced that the US would not sell the F-35 fighter jets to Turkey. File photo

America’s defence partnership with India is strong and is looking to make it ever stronger, the Pentagon has said as it warned nations against purchasing military hardware from other countries that are designed to counter its sophisticated fifth-generation aircraft.

The comments come a day after President Donald Trump has announced that the US would not sell the F-35 fighter jets to Turkey after Ankara purchased the S-400 missile defence system from sanctions-hit Russia.

“Our defence partnership with India, I think, is strong and we’re looking to make it ever stronger,” David J Trachtenberg, the deputy undersecretary of defence for policy, told reporters at a news conference on Wednesday.

Trachtenberg was responding to a question on the impact on bilateral defence ties as India goes ahead with its decision to purchase S-400 missile defence system from Russia.

“Can you have a major defence partnership with India, which is going ahead with a decision to buy S-400?” he was asked.

India inked an agreement with Russia last October to procure a batch of the S-400 missile systems at a cost of Rs 40,000 crore.

Trachtenberg said America’s decision to unwind Turkey’s participation in the F-35 programme was no surprise as its concerns had repeatedly been communicated to the Turkish government.

“Our reaction today is a specific response to a specific event. It is separate and distinct from the broader range of security interests where the United States and Turkey work together against common threats,” he said.

The official said the military-to-military relationship between the two countries remained strong. He added that the US would continue to participate with Turkey in multilateral exercises, as well as engage with the country on a broad range of NATO issues.

“While Turkey’s decision is unfortunate, ensuring the security and integrity of the F-35 programme and the capabilities it will provide to our partners remains our top priority,” Trachtenberg said.

Undersecretary of Defence for Acquisition and Sustainment Ellen Lord said when Turkey began publicly discussing its interest in the Russian-made missile defence system since early 2017, the US government had consistently communicated that the F-35 and S-400 were incompatible.