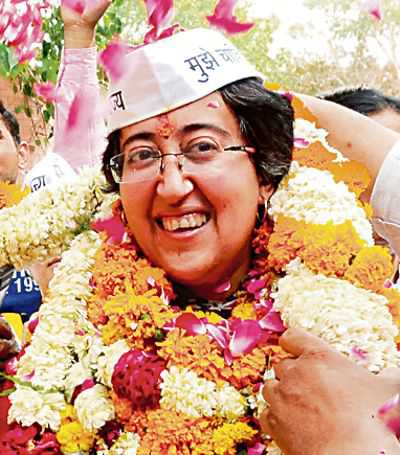 Amid presence of a large number of supporters, sitting MP Dr Harsh Vardhan filed his nomination papers at the Deputy Commission office in Alipur for the Chandni Chowk parliamentary constituency.

Later, he addressed the crowd from the election 'rath' saying that it was very evident that there is a pro-Modi wave in the country.

West Delhi candidate and sitting MP Parvesh Verma performed hawan before filing the nomination. The havan was organised in Janakpuri at 9 am, thereafter, he started his procession towards Rajourie Garden to file his nomination at the DM office in Rajourie Garden.

With a lot of fanfare, six candidates of the AAP filed their nomination papers on Monday, a day before the closing day of nominations, for the Lok Sabha elections in Delhi scheduled for May 12.

Prior to filing their nominations all candidates, making their electoral debut, held roadshows accompanied by senior leaders of the party in a show of strength.

Atishi had Deputy Chief Minister Manish Sisodia by her side when she filed her papers at SDM office at Geeta Colony while Chadha who filed his nomination in Saket was accompanied by his mother Alka Chadha and Rajya Sabha MP ND Gupta who later joined Brajesh Goel before he filed his papers for the New Delhi segment.

Gupta had party leader Satyendar Jain by his side while Singh was accompanied by RS MP Sanjay Singh and Pandey filed nomination in the presence of senior leaders Gopal Rai and Rajendra Pal Gautam.