NEW DELHI:Blaming the BJP for the demolition of a Ravidas temple in Delhi, senior AAP leader Sanjay Singh alleged that the saffron party had acted like Mughal emperor Babar. 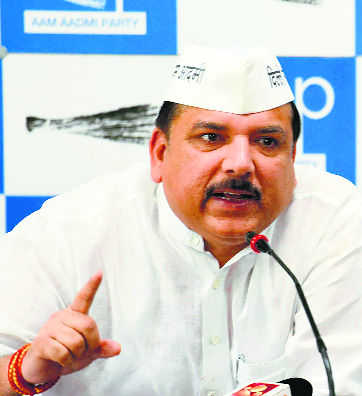 Blaming the BJP for the demolition of a Ravidas temple in Delhi, senior AAP leader Sanjay Singh alleged that the saffron party had acted like Mughal emperor Babar. The temple in South Delhi's Tughlaqabad was demolished on August 10 by the Delhi Development Authority on the direction of the Supreme Court, sparking protests from members of a community.

As it snowballed into a major controversy, the Aam Aadmi Party sought Prime Minister Narendra Modi's intervention in ensuring that the land is given back to the community to rebuild the place of worship.

The AAP MP said the demolition of the 500-year-old temple hurt sentiments of several people from the Dalit community.

“The BJP claims that Babar demolished the Ram Temple. In that case, the BJP is doing the same thing by demolishing Ravidas temple,” Singh told reporters. “No response has been received from either the prime minister or Housing and Urban Affairs minister (Hardeep Singh Puri) to the letters written by us,” he said.

He said if no action is taken in the matter, they would hold a protest at the Jantar Mantar on September 21. There was no immediate reaction from the BJP. Puri had earlier said the Centre is determined to find a solution and possibly identify an alternative site to “relocate” the temple. — PTI