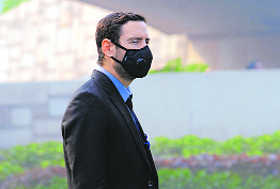 Israeli security person wearing a pollution mask as a protective gear and keeping vigil as he waits for President Reuven Rivlin at the Rajghat memorial of Mahatma Gandhi in New Delhi on Tuesday. Tribune photo: Mukesh Aggarwal

The city government's Transport Department has been ordered to submit a comprehensive proposal in the next meeting to scrap the impounded vehicles. The entry of trucks to be allowed only after 12 midnight till January 31, 2017 while ban on firecrackers and diesel generating sets will continue.

The Lt. Governor instructed all present in the meeting to ensure that ban on firecrackers, particularly during marriage season, is strictly observed and action is taken against violators. He also said that ban on diesel generating sets, including in marriages, shall continue.

In the meeting attended by senior government officials and representatives from various stakeholders, Jung sought feedback and its compliance of the directions issued by him in the meeting held at Raj Niwas on November 7.

The Special Secretary (Environment) informed that a public notice for closure of polluting industry in both confirming and non-confirming areas have been issued on November 9 while directions under Air Pollution Act banning of all fire crackers/fireworks (except on religious occasions) has been notified on November 8.

The DPCC has closed 33 units in confirming areas and 146 in redevelopment areas. The East MCD has also closed 13 polluting industries and issued 196 challans.

In view of orders to stop all construction/demolition activity, the South DMC issued 716 challans to violators, East DMC issued 383 challans and generated a revenue of 30 Lakhs, North DMC informed that certificates were taken from EE of six zones that all construction/demolition have been stopped; one JE was suspended for wrong reporting and 19 challans have been issued and a total of 11.5 lakh revenue has been generated.

The Special Secretary DPCC informed that they have issued 289 challans amounting to Rs 85 lakh and the Spl CP traffic police informed that construction has been stopped at 539 sites and 29 cases have been registered. The city department's Revenue department too has issued 115 challans at 179 sites and collected revenue of Rs 42.9 lakh.