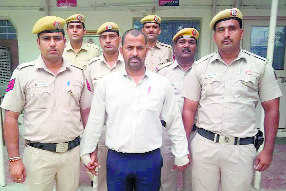 The accused, Bimal Kumar (38), is a resident of Sector 5 at Harola in Noida. Earlier, the Kalindi Kunj police arrested him for breaching peace. Since then, the accused wanted to take revenge from the two police officers of the station. He was waiting for the right opportunity to trap the policemen and it came along when he came across the minor girls. He hatched a conspiracy to frame the officers in the case of kidnapping.

On August 22, complainant Yashpal Singh, a resident of Khadda Colony in Jaitpur, received a call. The caller introduced himself as ASI of the Kalindi Kunj police station and told him that his three nieces, aged 17, 15 and 11 years, were with him at the police station and were complaining against him, the police said.

Singh directed his wife to reach the police station and look into the matter. The complainant’s wife met the ASI of the police station, who denied having anything to do with her neices, said DCP Chinmoy Biswal.

The officers of the station began an inquiry.  The technical surveillance was mounted, while the accused tried to extort Rs 12,000 from the complainant. Eventually, on August 23 the accused was apprehended from Khadda Colony in Jaitpur. After continued interrogation, Kumar broke down and confessed to the crime. The girls were found in a rented accommodation at Sehatpur.