New Delhi: A major blaze broke out in west Delhi''s Punjabi Bagh area here this afternoon after a truck containing plastic material caught fire and the flames spread to engulf an empty oil tanker and a nearby complex housing several warehouses and shops. 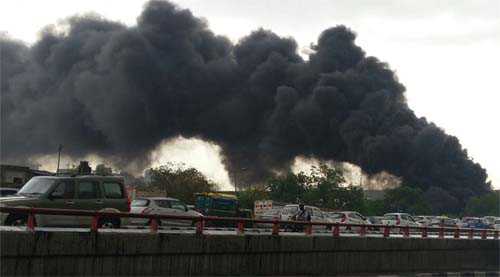 A frightening view of the blaze and the resultant smoke at Transport Nagar near the Punjabi Bagh Metro station in New Delhi on Wednesday. Tribune photo

New Delhi, June 3
A major blaze broke out in west Delhi's Punjabi Bagh area here this afternoon after a truck containing plastic material caught fire and the flames spread to engulf an empty oil tanker and a nearby complex housing several warehouses and shops.
Although nobody was injured in the incident, goods and property worth crores of rupees were gutted. Six godowns, four shops and four trucks were burnt in the fire.
The incident took place in the Transport Nagar area near Punjabi Bagh Metro station when a truck containing plastic raw material caught fire. The fire soon engulfed an empty oil tanker parked nearby.
The blaze spread quickly to a nearby building where a few automobile spare part shops and 12 transport warehouses were completely gutted.
"We had got a call about the blaze at 1:45 pm following which fire tenders were rushed. As many as 25 fire engines were pressed into service which doused the blaze by 3:45 pm. Luckily the oil tanker was empty but things could have been catastrophic. Cause of the fire is still unknown. No casualty was reported in the incident," said a senior fire official.
As thick black smoke filled the skyline of West Delhi, police had to cordon off the area and divert traffic on the nearby roads as the blaze was raging.
Local shopkeepers said that they could barely save their lives as the fire spread so quickly that they could do nothing to save any of their belongings or goods kept in their shops.
"We have come on the road, we have nothing left with us everything has been destroyed. We had been warning transporters not to park vehicles with inflammable items near the shops but nobody listened to us," said Rohan Aggrawal whose shop was gutted in the incident.
"There is no report of any casualty in the incident. We are ascertaining the loss of property which was caused in the incident," said a senior Delhi Police officer. (With PTI inputs)
SHARE ARTICLE