NEW DELHI:Chief Minister Arvind Kejriwal has agreed to order a probe into how crores of rupees on fixed charges were being collected to benefit power distribution companies. 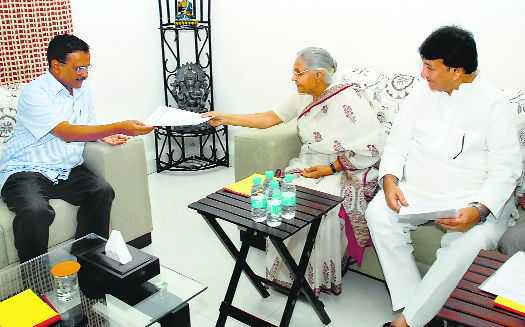 Chief Minister Arvind Kejriwal has agreed to order a probe into how crores of rupees on fixed charges were being collected to benefit power distribution companies. A Congress delegation, headed by Delhi Pradesh Congress Committee president Sheila Dikshit, brought to his notice that Rs 7,401 crore was being collected from consumers in the name of fixed charges and pension funds.

Kejriwal admitted that funds were being collected in the name of fixed charges by discoms, she said. The Congress delegation asked Kejriwal to immediately roll back the fixed charges and pension funds being illegally collected from the power consumers.

The Congress delegation met the Chief Minister to tell him about the problems being faced by the people of Delhi, particularly the power outages and acute water shortage.

She said the funds collected should be either returned to the people or adjusted against electricity bills of the next six months.