Disaster waiting to happen in Afghanistan

The black flag of Isis has replaced the white ones of the Taliban in a swathe of areas, including in Helmand. That is where UK forces spent eight years at a cost of more than 450 lives trying to defeat Mullah Omar’s fighters 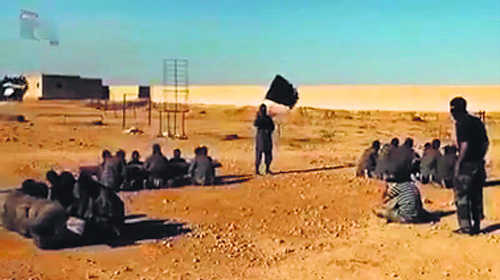 A video grab of an Isis camp at an undisclosed location. Isis presence is increasing in regions that were not in its ambit earlier.

WHEN tales began to emerge in January that Mullah Abdul Rauf has obtained the Isis franchise in Afghanistan and was inviting his comrades in the Taliban to join him there was general surprise. He had the most glittering of CVs for movement, severely injured fighting the Russians and incarcerated by the Americans at Guantanamo Bay before returning to triumphs in the jihad.

Rauf  began to gather followers rapidly, but a month later he was dead from a US drone strike. Isis, however, has been establishing itself since last autumn and keeps marching on, seizing areas from the country's traditional insurgents as well as the government and, significantly,  becoming a major player in the opium trade, the country's most lucrative asset.

The black flag of Isis has replaced the white ones of the Talibs in a swathe of areas including in Helmand where UK forces spent eight years at a cost of more than 450 lives trying to defeat Mullah Omar's fighters. Villages around Sangin, a town many of us remember as a symbol of the ferocity of Taliban resistance, with constant attacks, now has Isis presence. “Mullah Rauf started this, but these people (Isis) are now here, they openly challenge the Taliban”, reported Saifullah Sanginwal, a local tribal leader we had met at the time. “About 20 people have been killed, Yes, this is happening in Sangin.”

The declaration last week of adherence to Isis by Boko Haram, the Islamist group capturing territory and kidnapping girls in Nigeria, led to widespread publicity. There is alarm as Isis establish themselves in Libya, just across the Mediterranean, beheading Christian hostages. But the focus, understandably, has been very much on the war in Syria and Iraq and the latest barbarity being committed there by the Isis, it's spreading tentacles in Afghanistan has, internationally, gone largely unrecorded.

The spread of Isis into south Asia has major ramifications. The Afghan president, Ashraf Ghani, has reversed the policy of his predecessor, Hamid Karzai, with a policy of rapprochement towards Pakistan in the hope that elements of the Pakistani military and the secret police, the ISI, would bring the Taliban leadership, which they control, to the negotiating table.

There is already rising dissension in Afghanistan with no end to Taliban attacks with the Pakistanis being accused of reneging on the deal. Abdullah Abdullah, the country's Chief Executive with who President Ghani is in a power-sharing arrangement after a disputed election, is known to be sceptical about the policy.

Now we have the problem that even if the ISI reins in the Taliban, they have do not have the same leverage with Isis which has released footage of its members decapitating a Pakistani soldier. The video, in which Afghan and Pakistani fighters declare loyalty to Abu Bakr al-Baghdadi, the 'caliph' of the Islamic State, was presented by Shahidullah Shahid, a former Taliban spokesman.

A move by Isis into Pakistan will be a deadly addition to a state already hosting a toxic mix of terrorist groups from Al-Qaida (at war with Isis in Syria) to the Haqqani Network, which is also Afghan focused, to Kashmiri, Uzbek and Tajik militants. The consequences are likely to be dire in an already combustible scenario.

The gains for Isis are not purely military in Afghanistan. Like the Taliban they are grabbing chunks of the narcotic stocks which can then be moved west along the parts of Iraq under its control. This is of great value at a time when their income from sale oil from captured fields, said not so long ago to be a $1 million a day, are being hit by US led air strikes: the latest ones were today at a refinery in Tel Abyad.

Also, under Western pressure the Turkish authorities are turning less of a blind eye to Islamist supplied fuel from across the border. Another source of revenue, from the sales of looted historic artefacts, is likely to dwindle with the leadership now apparently decided on wholesale destruction for theocratic reasons.

It has taken a while for official recognition of the Isis threat in Afghanistan. Last month, General Ali Murad, of the Afghan army, stated that "elements of Isis, masked men, are active in Zabul (another Taliban dominated province) and Helmand and have raised black flags. Now, they are trying to spread their activities to the north."

General John Campbell, the US head of Nato forces in the country, acknowledged that “You do have some Taliban breaking off and claiming allegiance towards Isis. It's a source of course of concern to President Ghani and to me, (we need) to make sure that we understand where this is going in Afghanistan and Pakistan.”

The Russians have focused on drugs, Afghan heroin has been a long standing problem to them through the former Soviet Central Asian Republics. Viktor Ivanov, the head of the Federal Drug Control Service, maintains “Isis makes up to $1 billion annually from Afghan heroin trafficked through its territory” and this will grow as they hold more areas in the country.

Afghanistan is a war and a place the West would like to forget, there's too much of a sense of futility about the very long mission there. But that is the way we also felt about Iraq. There, too, Isis started on a slow burn and look what happened. Like Iraq, the West may have to revisit Afghanistan as well, this time facing an enemy more implacable and savage than the Taliban ever were.
The Independent