The mobs of Alwar

ALWAR is a strange town that keeps on shaming the nation every now and then. The latest is the assault on a final-year aeronautical engineering student, Mir Faiz, who according to news reports, was disrobed, made to a wear a woman’s dress, tied to a pole and attacked. 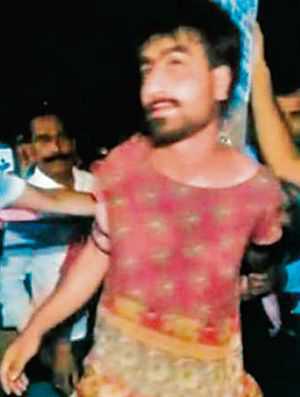 ALWAR is a strange town that keeps on shaming the nation every now and then. The latest is the assault on a final-year aeronautical engineering student, Mir Faiz, who according to news reports, was disrobed, made to a wear a woman’s dress, tied to a pole and attacked. The police was quick to claim that it was not a crime related to Faiz’s Kashmiri Muslim identity. Yet, every aspect of this incident reeks of a madness that has seeped into the psyche of the Hindi heartland: the hatred for a vulnerable outsider and deep-rooted misogyny. Even Faiz’s college refused to come to his rescue, accusing him of cross-dressing. Whatever the local police might claim, the people of the Valley will see this only as a targeted hate crime, further alienating and distancing them from the Indian State and society.
For, it was here in this very town in 2017, 55-year-old dairy farmer Pehlu Khan was brutally murdered while transporting cows and calves to his hometown Nuh in Haryana. The public lynching by a crowd of cow vigilantes was video-recorded, yet after two years the trial court found on August 14 that nobody really killed Khan. Just seven months after Pehlu Khan’s murder, another cattle trader, Ummer Khan, was shot dead. This lawless town seems to have internalised hatred so much that a crowd collects from nowhere to lynch complete strangers without any provocation.
After all, this was the town which in 2015 thought of naming a flyover after Nathuram Godse, the assassin of Mahatma Gandhi. That attempt was foiled but the attitude remains and it goes back to pre-Independence days. Alwar was an epicentre of anti-Muslim riots during the Partition and the then Maharaja of Alwar, Tej Singh, and his prime minister NB Khare were investigated for their alleged links with Godse. Khare, earlier a member of Viceroy’s Executive Council, later became the president of the Hindu Mahasabha. Unfortunately, the latest victim of this demented town, far removed from his Baramulla home, was already tormented by the lockdown in the Valley. The mobs of Alwar have to be cured of their madness lest they cause greater agony and shame.
SHARE ARTICLE