CHANDIGARH:Mohali started their campaign in the FC Mittal Trophy with a six wicket win over hosts Ludhiana today. 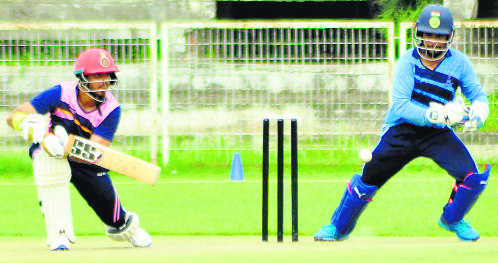 A batsman plays a shot during a match between Patiala and Jalandhar on Wednesday. Photo: Rajesh Sachar

Mohali started their campaign in the FC Mittal Trophy with a six wicket win over hosts Ludhiana today.

Put in to bat, Ludhiana were bowled out for 129 runs in 43.1 overs after the match was delayed and reduced to 45 overs a side due to wet outfield.

Harpreet Brar was the most successful bowler for Mohali, claiming 4/14. Varun Khanna took 3/21. Gurjot (36) was the highest run getter for the hosts.

Mohali, in reply, reached home in 26.1 overs with six wickets to spare. Abhijeet Garg scored an unbeaten 69-ball 55. The opener was also involved in a 49-run stand with Ramandeep Singh (24) for the third wicket, while he added another 54 runs to the total in company of skipper Gurkeerat Mann.

Gurkeerat smashed 38 runs off 27 balls before he was dismissed by Dipin Chitkara.

At Dhruv Pandove Stadium in Patiala, the hosts registered a 37-run win over Jalandhar in their opening match.

Prince Balwant Rai scored a sedate 52 and stitched a 124-run partnership with Malhotra for the sixth wicket to put the hosts back on track.

Harit Sachar was the most effective bowler for the visitors, picking up 3/56.

Mohali: Himanshu claimed a six-for as Mohali registered a five-wicket win over Moga on the second and final day of their U-16 Markan Trophy match at the newly-built PCA Stadium at Mullanpur on Wednesday. After conceding a four-run lead in their first innings on Tuesday, Mohali bowers led by Himanshu bundled out the visitors for a paltry 64 in their second essay. Himanshu spun a web around the Moga batsmen, foxing them with his guile and accuracy. The off-spinner took 6/17 after Sehajman (2/14) had dismissed the Moga openers cheaply.  Skipper Mukand Deep (31) was the only Moga batsman to score in double digits. Needing 69 runs for victory, Mohali battled home with a useful 24-run knock by Aryan Bhatia. Sehaj Khanna contributed 17 runs to the chase.