13 schoolteachers killed in road accident near Fazilka : The Tribune India

FAZILKA: Thirteen government school teachers, including five women, were killed in a road accident near Chandipur village, 9 km from here, on Friday morning. 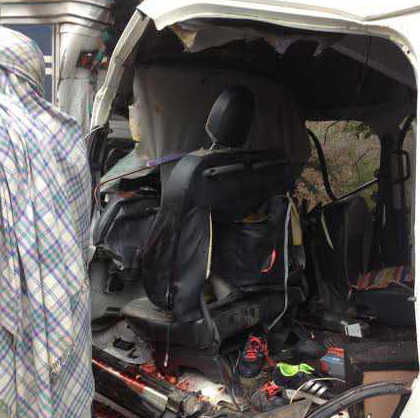 This is what remains of the jeep. —Tribune photo

Thirteen government school teachers, including five women, were killed in a road accident near Chandipur village, 9 km from here, on Friday morning.

They were going to their schools in a jeep. Eyewitnesses said there was a head-on collision between the jeep and a truck.

In all, 15 people were traveling in the jeep.

Gopi Chand, who was injured critically, was shifted to a hospital at Abohar.

The bodies of the deceased have been shifted to Civil Hospital at Fazilka. Senior officials of the district administration have reached the spot.

Among the deceased were newly appointed ETT teachers.

He said the loss of teachers, who chiselled young minds for the future of the nation, was “irreparable” and it had not only traumatised their families, but their students as well.

The Deputy CM and SAD chief said he and his government were with the bereaved families at this critical hour. He also advised all to use utmost caution while driving in the coming days when dense fog dominated during early and later hours of the day.

Amarinder asked the state government to change the school timings in order to ensure that “schoolteachers, students and other staff are not exposed to the risk of such accidents due to fog”. With PTI