14 dead, 17 hurt as bus rolls down gorge in Uttarakhand

DEHRADUN:Fourteen persons were killed and 17 others injured when the bus they were travelling in fell into a 300-metre-deep gorge today near Kirgani, on the Rishikesh-Gangotri highway, in Tehri district of Uttarakhand. 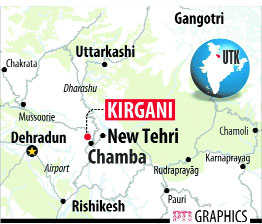 Driver lost control over the bus

Fourteen persons were killed and 17 others injured when the bus they were travelling in fell into a 300-metre-deep gorge today near Kirgani, on the Rishikesh-Gangotri highway, in Tehri district of Uttarakhand.

The 27-seater state road transport bus carrying 31 passengers was on its way to Haridwar from Bhatwari in Uttarkashi. The passengers were mostly from Uttarakhand and Uttar Pradesh.

“The injured were initially admitted to a nearby government hospital in Chamba and later referred to the AIIMS in Rishikesh. Those seriously injured were shifted through a helicopter,” said Tehri District Magistrate Sonika.

Reports suggest the bus driver, who was injured too, lost control over the vehicle after failing to navigate a crater and debris present on the road where the work for the all-weather ‘Char Dham’ road is on. The site also falls in the landslide zone.

Chief Minister TS Rawat, who met the injured at the AIIMS, has announced an ex gratia of Rs 2 lakh to the families of the dead and Rs 50,000 for the injured. A magisterial inquiry has also been ordered.

Forty-eight persons were killed in a similar accident in Pauri on July 1 when a bus fell into a gorge after the driver lost control over it.