2nd phase of impounding over, but leakage continues

SUNDERNAGAR: The Kol Dam authorities have claimed successful completion of the second phase of impounding, which was started on November 3, 2014, from level 510 m. 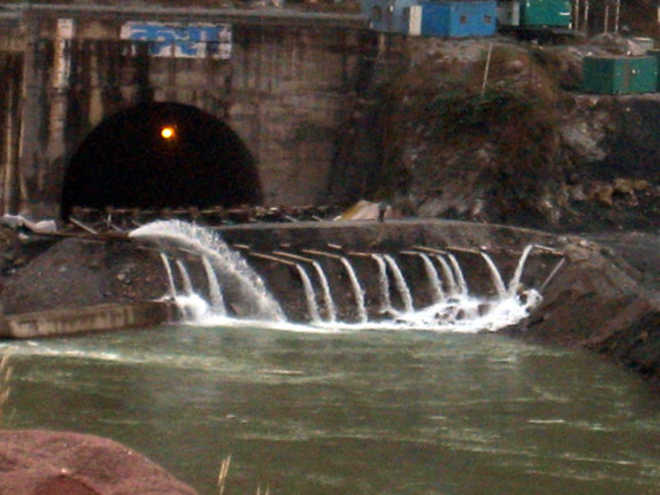 A view of  leaking water being drained out from the Kush tunnel on  Sunday. Photo by writer

The Kol Dam authorities have claimed successful completion of the second phase of impounding, which was started on November 3, 2014, from level 510 m. The level of the dam had been successfully raised up to 595 m till January 3, 2015.

Official sources said now it would further observe various parameters of the dam by keeping the same level for about a month. Afterwards, the level would be raised and generation would be started by April. Earlier, the first phase was completed successfully up to 560 m.

But on the other hand, a leakage was noticed at an outlet from diversion tunnel Kush.

A visit to the 800-mw project, situated on the border of Mandi and Bilaspur, confirmed that the leakage was still observed from tunnel Kush and the quantity of water drained out presently from the tunnel was much more than it was observed earlier when the gates of Kush were completely closed.

For the construction of 163-m-high earth-cum-rock filled dam, the water of the Sutlej was diverted in 2004 from the twin diversion tunnels Lav and Kush.

In December 2013, the impounding of the dam was started, but it was unsuccessful due to some defects in the gates of the bottom outlet in the Lav tunnel and subsequent attempts also proved futile. During testing, it was also observed that the gates of tunnel Kush were found leaking so the authorities decided to plug the tunnel and constructed a 15-m concrete structure in the middle of tunnel Kush few days ago, but the leakage was still there.

Many dewatering pumps are installed to drain leaking water out of the tunnel round the clock.

Parveen Bharti, PRO of Kol Dam, said there was nothing to worry. Since the water level had gone up, flow was observed due to recharging of area which would stop shortly.

No other official was available for comments. It was observed that the authorities have till date not allowed any mediaperson to visit the project officially for the last more than an year.

Officials engaged in plugging the tunnel said the leakage of water was still observed from the gates, in addition to seepage. However, a special provision was kept to drain out the water.

Interestingly, this project was the first hydroelectric project undertaken by the NTPC and was to be commissioned in 2009.