Generally, all girls would want to get rid of their boyfriend’s roving eye. Sometimes, however, like when you have ten fairly interesting people, or lets says actors and superstar, sitting in front of you, it is not a bad idea to wander your eyes before settling down with business. 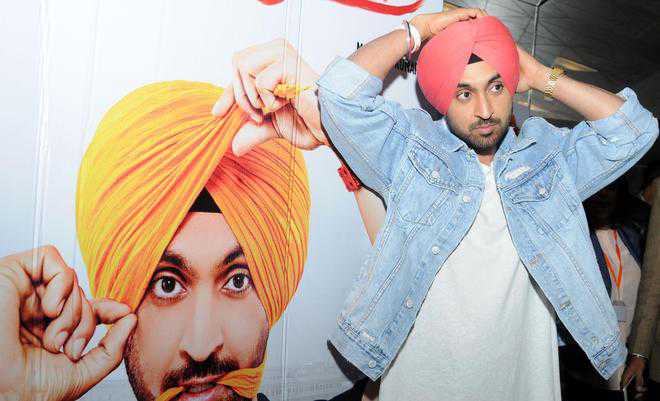 Generally, all girls would want to get rid of their boyfriend’s roving eye. Sometimes, however, like when you have ten fairly interesting people, or lets says actors and superstar, sitting in front of you, it is not a bad idea to wander your eyes before settling down with business. Here, it is getting to know the elaborate cast of Punjabi film Ambarsariya, who is in Chandigarh launching its trailer. The actor, who is pretty much in demand, Diljit Dosanjh, is the one our eyes and questions zero down on, to start with.

“I would be frantically texting the director of our film, Mandeep Kumar, to direct a nice film. Mandeep weaved magic with his debut film Jihne Mera Dil Luteya that launched me. Finally, after much pestering, he agreed and the result is Ambarsariya,” says Diljit, who is of the opinion that Punjabi film industry does not have enough good directors. “As an actor, I am always on the look out for a director, who can extract work from me and Mandeep is one of them.”

This naturally makes us look at Mandeep. “Like Diljit bhaji has been pestering me, I have also wanting to make a Punjabi film. I think the bar of Punjabi cinema has risen immensely, so you can’t fool the audience by giving them anything and everything. The film should have a strong storyline and promoted well to do wonders in this industry,” shares Mandeep, director of Ambarsariya.

It’s time to set our eyes on the next, and the word promotion gradually takes us to Kumar Taurani of Tips, the producer of the film. “I can invest my hope in Punjabi cinema if I have a good team—a brilliant director who knows what he wants, a good script and good actors. But what some new producers are doing is not the way to approach films. One should know what you are getting into, even if you are from outside,” adds Kumar Taurani making our job of settling our focus on a new person easy, with the mention of the word outside. So, Ambarsariya has two beauties (actually three), but two are from outside, we mean abroad- Monica Gill, Miss India USA and Lauren Gottlieb, of ABCD fame.

“I picked up the role of a Punjabi from abroad, something I was pretty settled with. I couldn’t have said no to this project with Diljit, Mandeep and Kumar Taurani,” Lauren smiles. Pretty Nanvneet Kaur Dhillon smiles.

Any chance of hearing Punjabi from Lauren comes to a halt with ‘Sat sri akal’. “I wouldn’t say I know it all. I am still learning Punjabi and enjoying it. Punjabis are loving people,” she says paving way for the Punjabi origin actress Monica Gill to thank Baba ji for giving her this film. “With Ambarsariya, I got the positive vibes and I knew my journey as an actress who has moved to Mumbai would be good,” Monica shares. Positivity moves us to actor and writers Rana Ranbir and Karamjit Anmol. Rana lays emphasis on good dialogues, and Karamjit nods in approval.