As biennial and collaborative spaces began to serve as alternative production systems for contemporary art, as against galleries and museums, the concept of a residency for the artists began to evolve around the 1990s. The region saw the opening of its first such weeklong art residency in the Morni Hills, close to Panchkula, recently. 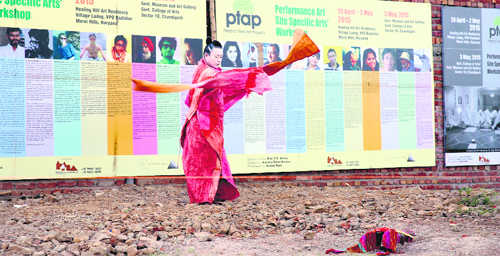 Yonggu Shin’s performance art titled “Assemble the Pieces of Dreams” reflects on the process of recovering a wing, which represents a very significant implication: human imperfectness.

Ladog, Morni Hills.  For the young practitioners of art, products of strictly UGC-approved syllabus-based education that limits the understanding of art rather than let it soar, the new practices of global art remain inaccessible. Their art, often based on producing an object — at best a painting, sculpture, or installation art — restricts their entry into the global contemporary art scenario.

For these young artists, a residency in their vicinity, held from April 26 to May 2, offered a peep into the limitless possibilities of the visual art, not dependent upon materiality and thus the logistics involved in transport and storage of art works. The Peepal Tree Art Project, under Healing Hills Art Residency (HHAR), at Ladog village in Badisher valley of Morni Hills opened a new prospect of bridging the gap between the high art — celebrated by galleries that cater to a certain class — and a thriving pool of talent of the mofussil that awaits a new platform to showcase their talent.