Dehradun: Dehradun was a place that was well known for its greenery, pleasant climate and serene environment. It had an excellent network of canals gifted by the British. 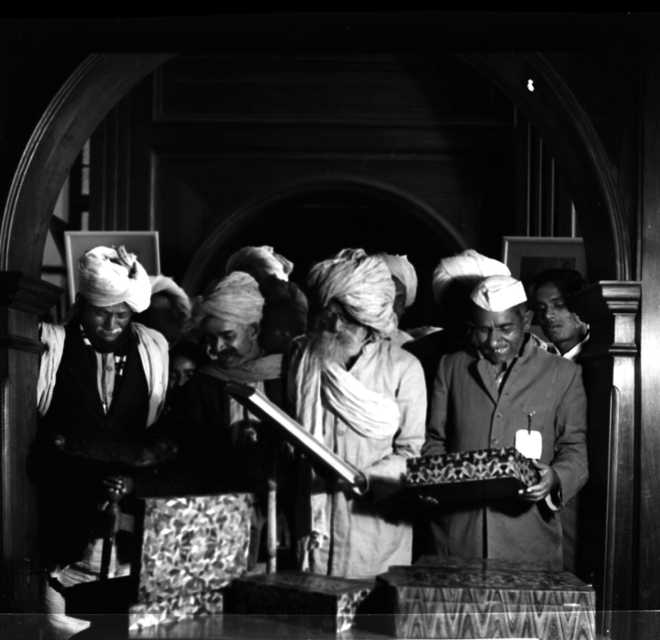 A number of kisan parties comprising nearly 700 farmers from Bombay, Gujarat and Madhya Pradesh visited the Forest Research Institute and College in Dehradun in January 1959. The farmers showed keen interest in the activities of the institute. They saw the exhibits in the Timber Museum of the institute when they visited the place. Photo courtesy: Lokesh ohri

Dehradun was a place that was well known for its greenery, pleasant climate and serene environment. It had an excellent network of canals gifted by the British. It had sparse population and its landscape was dotted with litchi orchards and tea gardens. The cultivation of local basmati rice was an integral part of agriculture in the city.

Dehradun finds mention in the Mahabharata. Guru Dronacharya is believed to have given training in archery to Kauravas and Pandavas in Dehradun. Even the Sahastradhara waterfall is stated to be the result of piercing of Sahastradhara rocks by arrows of young Kaurvas and Pandavas, leading to the creation of numerous streams. The other theory states that Dehradun got its name from Guru Ram Rai, who settled in the city and gave it the name Dehra, as derived from ‘dera’. Guru Ram Rai was the elder son of Sikh Guru Har Rai but was expelled from the line of succession. He became part of the Udasi sect and came to Dehradun around 1675 and settled here.

In Skanda Purana, Dun formed part of the region called Kedar Khand. It was included in the kingdom of Ashoka by the end of the 3rd century BC. Dehradun remained part of the Garhwal kingdom for long.

The Doon valley holds much significance as it lies in the midst of two of the holiest rivers Ganga and Yamuna that meander on the east and west sides, respectively. Besides, Asan, Suswa, Tons, Rispana, Bindal and Amalava are other rivers that flow through the district.

Dehradun also boasts of a rich historical legacy. First Prime Minister Pandit Jawaharlal Nehru wrote parts of his book “Discovery of India” while in prison here. Dehradun was also a witness to ‘Namak Andolan’ when a large number of freedom fighters gathered at Kharaket and broke the British salt law. Freedom fighter Rash Behari Bose was a clerk at the Forest Research Institute (FRI) and stayed at Ghosi Gali in Dehradun. He took a 37-day leave to effectuate the conspiracy to assassinate Lord Charles Hardinge in 1912. By the time the British realised who the mastermind of the conspiracy was, Rash Behari escaped to Japan. In 2006, the FRI located a file of Rash Behari that revealed that he joined the institute in September 1906 and was later promoted as head clerk at a salary of Rs 65. His service was terminated in May 1914 on the ground of long absenteeism.

Interestingly, during the World War-II, Dehradun was used by the British to detain Italians, Austrians and Germans. The Clock Tower that  Lal Bahadur Shastri had inaugurated was completed in 1953. The then Governor of Uttar Pradesh  Sarojini Naidu had laid its foundation stone on July 2, 1948. Its unique hexagonal architecture lends it a heritage value.

Places such as Ashley Hall and Connaught Place still bear testimony to the Raj period influence on Dehradun. Some of the educational institutions in Dehradun such as the Convent of Jesus and Mary are more than 100-year old.

For a common farmer in the country, the FRI, the British gift to Dehradun, remained out of reach. It was after Independence that farmers entered the FRI for the first time. Today, the FRI focuses much on farmers so as to ensure that the benefits of research reach them. Farmers from across the country visit the institute for getting firsthand knowledge of latest research work.

However, Dehradun has continuously lost its old charm of greenery to infrastructure development after the formation of a separate state of Uttarakhand.

Doonites had never imagined apartments in the city. Dehradun was known for its sprawling bungalows surrounded by lush green trees. But it has lost on all counts. Rampant construction in the city has taken a big toll on litchi orchards. The Dehradun basmati rice has almost become history. The felling of a large number of fruit trees by developers shortly after the formation of the state in 2000 to build residential colonies destroyed litchi orchards in localities such as Dalanwala. Similarly, canals that once criss-crossed Dehradun have been covered for road widening.

Biju Negi, an old resident of Dharampur in Dehradun, says the charm of the city has been the biggest casualty of development. He recalls how in the earlier seventies, Dehradun city was restricted to Clock Tower, Darshan Lal Chowk, Tilak Road and district courts areas and people avoided venturing into the interior areas of Dharampur due to less habitation and a thick tree cover. But now it forms the heart of the city as trees have gone missing and constructions dot the landscape. He vividly recalls potato crop being grown in a field where today exists thickly-populated Nehru Colony.