Carnival we ought to grow out of : The Tribune India

Carnival we ought to grow out of

HaVING lived in Bangalore and Chandigarh for considerable periods of time, I have seen the “garden cities” turn into “car cities”. Both are ready to choke. 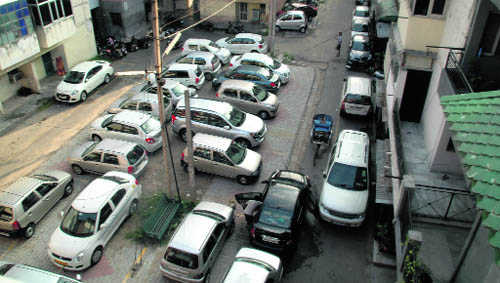 This is Chandigarh, it could be mistaken for any Punjab or Haryana town. It doesn’t look good anywhere.

HaVING lived in Bangalore and Chandigarh for considerable periods of time, I have seen the “garden cities” turn into “car cities”. Both are ready to choke.

Henrik Valeur, a Danish urbanist and researcher who   worked with an Indian Institute of Science team to create infrastructure for non-motor-ised transportation in Bangalore, also spent six months in Chandigarh in 2010. He studied how meeting places could be created in the periphery. Alongside, he came up with a project to make one sector vehicle-free and see its impact. Assisting him were Chandigarh College of Architecture students.

Sector 19 was chosen since it was one of the first to be developed, with a layout typical of the rest. Like other sectors, 19 has four entrance points, so Henrik’s team proposed parking lots at each of these — two above the ground and two below in such a way that the maximum walking distance to any particular house would not be more than 300 metres.

For the transportation of the disabled, deliveries, garbage, etc, the team proposed cycle and solar-powered rickshaws.

The blueprint had cycle lanes in the market street, connected to the four entrance points.

The crossings would have traffic lights, which would also make it possible to control traffic at the roundabouts. At the crossings, there could be stops for a shuttle bus service.

Henrik’s idea was that by removing all cars, a lot of space would be freed. “Almost 25 per cent of the total surface area of the sector is used by cars, either for driving or parking. All of this asphalt, which contributes significantly to the overheating of the city, could be removed, and instead, eco-friendly pathways for pedestrians, cycles and rickshaws could be built. These would be narrower, though still providing sufficient space for emergency vehicles,” says Henrik.

The space thus created could be used for communal activities such as playgrounds, and kitchen gardens. Or to accommodate people who work in the sector but live outside.

“When the cars are not parked right in front of the houses but in a parking lot, much more shopping would take place locally. This would help to reinvigorate the decaying market street.”

The solutions are interesting, but would it be possible to implement these even in a restricted area within a sector? Especially in a region where people are so conscious of asserting their social status?

The Master Plan Committee did not seem very enthusiastic of the idea, says Henrik. “In fact, it was not until a year later, when the proposal was discussed during hearing of another case in the High Court, that the UT Administration was told to make one of the sectors car-free. But in the end, nothing happened.”

He also states how any idea that aims to reduce the sales of cars faces immediate assault. “In 2013, six out of the world’s 10 largest companies in terms of revenue were in the petroleum industry, two were automakers and one a power company. They make sure no policy harms their interests.”

So, can nothing be done? To begin with, the mindsets can be changed. The use of plastic bags has come down, hasn’t it, lesser people smoke now.

A better and faster bus service, cheaper non-pedal rickshaws, lesser use of cars, all are doables. A Metro will take  time, we have to act faster.

Rediscovering walking and cycling is basic for Henrik. He’s all for cycle hiring centres in every sector. Hire a cycle to go to office or the market, drop it at the nearest kiosk there, and hire one again on your way back. Replicate it all over Chandigarh. Any takers?