City schools held different events to celebrate Baisakhi. During functions organised to mark the day, students were apprised of the significance of the harvest festival besides religious significance of the day as on this day, Guru Gobind Singh established the Khalsa.

Peace Public School ushered in golden hues as the school campus was tastefully decorated on the auspicious occasion of Baisakhi. Tiny tots of kindergarten arrived well attired in vibrant colours to clinch the title of ‘Miss Punjaban’ and ‘Mr Punjab.’ Students of Classes I to III were taken to the swaying fields to familiarise them with the hard work a farmer does right from sowing seeds till harvesting produce. Students of the senior wing enthralled the audience by presenting folk dances.

Little Blossom Nursery School celebrated the festival with fervour. Teachers told students about the importance of Baisakhi. Students were informed that the day marked harvesting of rabi crop. The school Principal told them that on this day, Sikh religion was established. During a cultural programme, children performed giddha and bhangra.

The festival was also celebrated at ABC Montessori School (BRS Nagar). Girls and boys were dressed up in Punjabi attires. Further, to make students aware of the significance of the festival, they were shown the golden glow of Punjab’s field. Students danced to tbe beats of Dhol. School director Amanpreet Singh Arora said little ones added colour to all festivals, especially Baisakhi.

The harvest festival of Punjab was celebrated with gaiety at Guru Nanak International Public School, BRS Nagar. Senior students delivered speeches and recited religious hymns. Kindergarten students looked pretty in Punjabi attires. They sang, danced and binged on the festive food. The function concluded with a speech by Principal Bhupinderjit Kaur Bedi, who threw light on the history of ‘Khalsa Panth’. The tribute was paid to the martyrs of Jallianwala Bagh massacre.

A function, ‘Baisakhi Festival-2015’, was organised at Everest Public Senior Secondary School, Moti Nagar, Ludhiana, where Rajinder Sharma, president, Association of the PSEB Affiliated Schools, Punjab, arrived as the chief guest. A fancy dress competition was organised. Dressed in traditional attire, students presented folk dances and folk songs. Principal Asha Sharma told the students about the importance of the day and how on this day, Guru Gobind Singh selected ‘Panj Piaras’ (the five beloved) and established Khalsa Panth. They were also told about the various aspects of rural Punjab and its cultural heritage. Prizes and sweets were distributed among the tiny tots.

Bhartiya Vidya Mandir, Kitchlu Nagar, Ludhiana, celebrated the day with festive fervour. Students took part in giddha, bhangra and other recreational activities. Exuberant boys and girls of Classes I and II walking the ramp in Punjabi traditional outfits was the main highlight of the festivities. Students of Classes VI to VIII took part in folk song competition. Students of senior classes read papers on Jallianwala Bagh massacre, history of Khalsa Panth and Baisakhi.

The foundation day of Green Land Convent School, Sector 32, Chandigarh Road, and Baisakhi were celebrated with great zeal on the school campus. The staff and students of the school accorded a warm welcome to the chief guest, Rajesh Rudhra, chairman-cum- director of the chain of Green Land Schools. The celebration began with recitation of a religious hymn by students of senior classes. The students of junior section dancing to hit Punjabi numbers, including ‘Tu Jit Gayi Gidha Haar Gya’, left the audience spellbound. A fancy dress competition was also organised on the occasion. Students were looking charming and vibrant in Punjabi dress-up. In his address, the chief guest made students aware of religious and cultural importance of Baisakhi. He said such celebrations infuse a spirit of courage and confidence amongst the students. He told the students that success would come natural to them if they had five values, Guru ki kirpa, diligence, honesty, hard work and blessings of parents. Principal Vinita Sanan appreciated the exemplary work of students and congratulated them on the occasion of Baisakhi and the school’s foundation day. 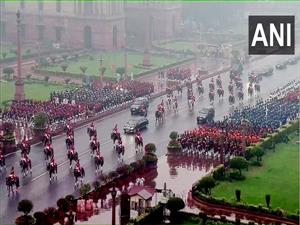