Mohali: Embrace technology with caution and do not let machines become your masters. No matter what benefits of technology are, the future is scary. This was stated by Justice Mahesh Grover, Judge of the Punjab and Haryana High Court, at the Army Institute of Law (AIL) here today. 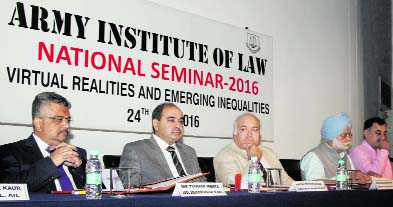 Dignitaries during a national seminar at the Army Institute of Law in Mohali on Saturday. A Tribune Photograph

Embrace technology with caution and do not let machines become your masters. No matter what benefits of technology are, the future is scary. This was stated by Justice Mahesh Grover, Judge of the Punjab and Haryana High Court,  at the Army Institute of Law (AIL) here today.

Justice Grover, who was addressing students at a national seminar on “Virtual Realities  and Emerging Inequalities”, recalled his childhood days and said a tremendous change had taken place in the past 60 years and there was much more to come.

“Sometimes the pace at which we travel scares you. It is scary if human beings become irrelevant and machines superimpose themselves,”  he added.

He further said, “We were a generation which learnt to fly like birds do fall, flutter and fly. You are like sleek jets waiting to fly. There was only one motive that was success, success and only success. You are gradually being  weaned away from the human touch and live in an unreal world”.

He quoted what Steve Jobs was reported to have said on his deathbed, “Stop pursuing wealth. It can only make a person into a twisted being like myself”.  He advised the students not to let technology sweep them off their feet or they would be left friendless and lonely. He asked them to make technology work to their advantage.

Pavan Duggal, an advocate at the Supreme Court of India, said virtual reality was the next call for cyber criminals and cyber security would have to play a major role. He said Yahoo was hacked recently and it was the biggest hack. Mobile crime was the next challenge. Virtual reality represented the future of the present, he added.

MP and  Senior Advocate KTS Tulsi said the legal profession was about to undergo  a radical change. “By 2030, technology will overtake human intelligence. Computers do not need anyone to argue the case. By 2020, you will have driver-less cars. Solar energy will become popular, 3D printers will come into use and a universal currency will dominate. The lifespan will increase and the cheapest smart phone will become your teacher. The pace of change is 1,000 times more at present than earlier and students should get ready for the new age,” he said.

Additional Solicitor-General of India Tushar Mehta said the only area the Internet had affected in a negative way was that of law. The dependence of legal research on the Internet had adversely affected the thinking process. “Do not allow technology to overpower your natural instincts as a lawyer,” he added.