DHARAMSALA: The Environmental Impact Assessment (EIA) of the Swan river project has failed to assess the effect of canalisation of the river on wetlands, water recharging and fauna of the Una district. 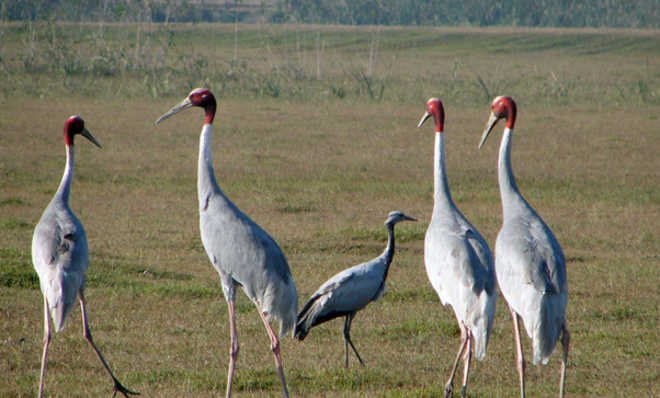 Sarus cranes in the Swan wetlands of Una district, which are a natural habitat to many species. A Tribune Photo

The Environmental Impact Assessment (EIA) of the Swan river project has failed to assess the effect of canalisation of the river on wetlands, water recharging and fauna of the Una district.

The Swan river that originates in Shivalik hills of the Daulatpur region is lifeline of Una district. The river travels about 85 km in Una before merging in the Sutlej near Anandpur Sahib in Punjab.

Although it is called a “sorrow of Una district” due to flash floods in monsoon, the wetlands created by the river were also responsible for water recharging in the area. The water level is high in areas around the Swan river. At places, farmers are using artisan wells (where water gushes out from earth) for irrigation purpose.

As per the EIA report, a copy of which is with The Tribune, 5,000 hectares of land will be reclaimed after canalisation of the river. Most of this land is wetland comprising of swamps that recharge the underground water.

The authorities should have taken into account the water recharging impact of the Swan canalisation in the EIA. The long-term impact of reclamation of land and drying of swaps would be felt in the form of declining water table, he said.

Ornithologist Prabhat Bhatti, who has been studying the fauna in the Swan river wetlands for the past two decades, said it was home to rare species of birds and animals. The wetlands of the Swan river were home to sarus crane, a bird variety that has been declared as endangered in the IUCN list. But it has no mention in the EIA of the Swan river project, he said.

The EIA report of the Swan river project has very little mention of the impact of canalisation on the fauna of the area. The report states that there was no major faunal species in the area. There are just a few rabbits, blue bulls and jackals in the project area, the report states.

Environmentalists working in the area allege that the wetlands of Swan river comprises many mammal, reptile and avian species. The EIA should have suggested measures to protect the species in the wetland area, they said.

The EIA report states that 23 per cent of project area was open forest and 15.65 per cent was medium forest. It means that about 40 per cent of total project area was forest. The report suggests that land reclaimed from the Swan project would be used for forestation and developing fisheries. However, most of the land has been put to farming use.

NM Saini, Superintendent Engineer and in charge of the Swan canalisation project, said the department was taking into consideration measures suggested in the EIA report. He said that project was environment friendly.