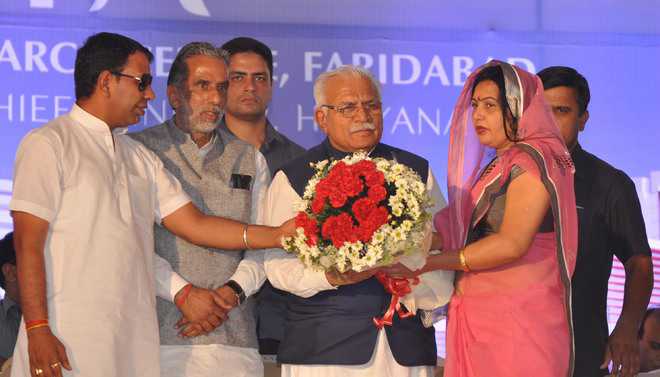 Chief Minister Manohar Lal Khattar today laid the foundation stone for the Mata Amritanandamayi Math’s Amrita Institute of Medical Sciences and Research Centre (Amrita Hospital) in Sector 88 here, which would be North India’s largest hospital with 2,000 beds. The centre is spread over 100 acres.

Khattar claimed his government had increased the budget for the health sector to Rs 3,916.94 crore, which was 37.1 per cent higher than the budget expenditure of last year. He said the state government was working for the expansion of the health infrastructure and would establish a medical college in each district. The work of opening such colleges in Panchkula, Bhiwani and Jind was underway, he said. “A national-level cardiovascular institute will come up at Badsha village of Jhajjar. It will be a 710-bed institute and will be ready in three years,” said the CM.

He said the sex ratio in the state had crossed the 900th mark after the implementation of the ambitious ‘Beti Bachao, Beti Padhao’ programme launched last year. He said the government had hiked the honorarium of the ASHA workers for the success of the programme.

Union Minister of State for Social Justice and Empowerment Krishan Pal Gurjar said the hospital would provide basic medical facilities to thousands of residents of the district and the region.

Dr Prem Nair, Medical Director, Amrita Institute of Medical Sciences, Kochi, said, “The new hospital in Faridabad will feature a complete range of specialties, super-specialties and centres of excellence. These will include a heart institute, an institute for high-precision cancer diagnosis and therapy, organ transplantation and an advanced centre for neurosciences and epilepsy.”