Fill it, Forget it

CHANDIGARH:Marking another turning point in its longstanding water-sharing dispute with Haryana, the Punjab Vidhan Sabha today unanimously passed a Bill that provides for returning free of cost 3,928 acres acquired for constructing the contentious Sutlej Yamuna Link (SYL) canal to the original landowners. 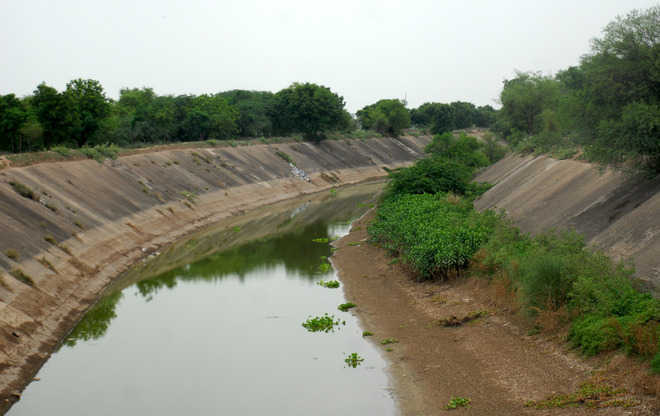 Takes 20 minutes to turn clock back on sutlej yamuna link

Marking another turning point in its longstanding water-sharing dispute with Haryana, the Punjab Vidhan Sabha today unanimously passed a Bill that provides for returning free of cost 3,928 acres acquired for constructing the contentious Sutlej Yamuna Link (SYL) canal to the original landowners.

Though the initial proposal was to ask the owners to return the compensation paid decades back for acquiring their land to construct the canal along with a nominal interest, Chief Minister Parkash Singh Badal insisted on returning the land free of cost. The logic behind it is to enable the landowners to put to use whatever money they have for land filling of the canal portion before starting cultivation.

However, Haryana Governor Kaptan Singh Solanki, who also holds charge of Punjab, declined a request from both the ruling and Opposition MLAs to meet him in the evening to prevail upon him to give his assent to the Bill. He instead allotted them time for 1 pm tomorrow. Sources say he is weighing all legal options before he decides on the next course of action.

Earlier, the Assembly saw a credit war between the Akali-BJP and the Congress. Even then, it took just 20 minutes to pass The Punjab Sutlej Yamuna Link Canal Land (Transfer of Property Rights) Bill before Zero Hour of the ongoing Budget Session, with the Assembly claiming that Punjab was facing water scarcity and there was not a drop to spare.

It is learnt that Punjab will return the money Haryana had given as “operational costs” of Rs 390 crore, with interest. Committees in Ropar, Fatehgarh Sahib and Patiala will be set up soon to transfer land and settle claims.

Though the Bill was not listed in the business scheduled to be taken up by the House, Chief Minister Badal got up as soon as the House resumed work after Friday, saying that he was introducing The Punjab Sutlej Yamuna Link Canal Land (Transfer of Property Rights) Bill, 2016. When Leader of Opposition Charanjit Singh Channi got up to make a point that he had given the idea of returning the land acquired for SYL canal to their owners, he was snubbed by Speaker Charanjit Singh Atwal.

“The discussion will be held after the Bill is presented. There is a precedent of a Bill being introduced in the House, without it being first discussed in the Business Advisory Committee meeting. In 2004, when the then chief minister Capt Amarinder Singh had introduced the Termination of River Waters Agreement, it was an unlisted item,” he said.

Later, during the discussion, Channi, while extending the Congress' full support to the legislation, claimed that he had proposed to bring an amendment regarding the same but his idea was hijacked by the government. "You have brought this Act under pressure from us," Channi said to members of treasury benches. However, the Speaker maintained that he had not received any such amendment. At this, almost all Opposition members got up and protested. However, the Bill was passed unanimously.

Residents must prepare for a long and peaceful struggle to save the state waters as action in House alone is not enough. - Parkash Singh Badal, Punjab cm